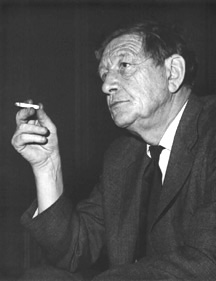 Auden was born 21 February 1907, in York, the son of a physician. At first interested in science, he soon turned to poetry. In 1925 he entered Christ Church College, University of Oxford, where he became the centre of a group of literary intellectuals that included Stephen Spender, Christopher Isherwood, C. Day Lewis, And Louis MacNeice. After graduation he was schoolmaster in Scotland and England for five years.

In London, in the early 1930s, Auden belonged to a circle of promising young poets who were strongly leftist. His book Poems, which helped to establish his reputation, focused on the breakdown of English capitalist society but also showed a deep concern with psychological problems. He subsequently wrote three verse plays with Isherwood: The Dog Beneath the Skin, The Ascent of F-6, and On the Frontier. In 1937 he drove an ambulance for the Loyalists in the Spanish civil war. In the same year he was awarded the King’s Gold Medal for Poetry, a major honour. Trips to Iceland and China – the first with MacNeice, the second with Isherwood – resulted in two jointly written books, Letter from Iceland, and Journey to a War.

In 1939 Auden moved to the US, where he became a citizen and was active as a poet, reviewer, lecturer and editor. His Double Man and For the Times Being reflect an increasing concern with religion, which, he discovered, offered a better solution to his problems than communism. The Age of Anxiety, a “baroque eclogue” that takes place in a New York City bar, won him the 1948 Pulitzer Prize for poetry and provided an apt and convenient name for his era. His numerous other works include Collected Poetry, the Shield of Achilles, Collected Longer Poems, and several opera librettos written with the American Chester Kallman. From 1956 to 1961 he was professor of poetry at Oxford, and in 1972 he returned to Christ Church as a writer in residence. He died 28 September, 1973, in Vienna.

As a poet, Auden bore some resemblance to T.S. Eliot. Like him, he had a cool, ironic wit, yet was deeply religious. He was concerned to a greater degree than Eliot, however, with a social problems. Possessed of probing psychological insight, Auden also had a supremely lyric gift.