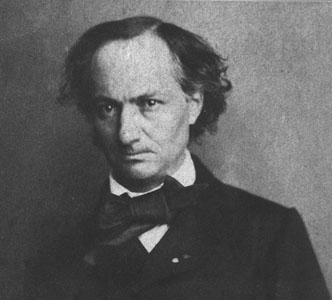 One of the greatest French poets of the 19th century, called ‘the father of modern criticism,’ who shocked his contemporaries with his visions of lust and decay. Baudelaire formed with Stéphane Mallarmé and Paul Verlaine the so-called Decadents. Baudelaire was the first to equate modern, artificial, and decadent. In LE PEINTRE DE LA VIE MODERNE (1863, The Painter of Modern Life) Baudelaire argued in favor of artificiality, stating that vice is natural in that it is selfish, while virtue is artificial because we must restrain our natural impulses in order to be good. The snobbish aesthete, the dandy, was for Baudelaire the ultimate hero and the best proof of an absolutely purposeless existence. He is a gentleman who never becomes vulgar and always preserves the cool smile of the stoic.

Charles Baudelaire was born in Paris, where he lived most of his life. His father, François, was a sixty-year-old ex-priest and widower when he married Caroline Dufaÿs, a penniless orphan, who was twenty-six. François died in 1827. For some years Baudelaire was on good terms with his stepfather, Major Jacques Aupick, but in the late 1830s they started to have difficulties. Aupick, who became a senator, died in 1857. Baudelaire studied at the Collège Royal, Lyon (1832-36) and Lycée Louis-le-Grand, Paris (1936-39), from where he was expelled. His intention from an early age was to live by writing, but still he enrolled as a law student in 1840 at the École de Droit. Probably at this time he became addicted to opium. He also contracted syphilis, which turned out to be lethal. During this period Baudelaire fell heavily into debt; he never finished his law studies.

In 1841, Baudelaire was sent on a voyage to India, but he stopped off at Maurius. On his return to Paris in 1842, Baudelaire met Jeanne Duval, a woman of mixed race, who became his mistress and inspiration for his poem ‘Black Venus’. Other women, who inspired his poems, were Mme Sabatier, and the actress Marie Daubrun, but for most of his life Baudelaire maintained a relationship with Jeanne. Baudelaire lived some years on his inheritance from his father. Two years later Baudelaire was deprived, by law, of control over this income by the Counseil Judicaire. After the decision, Baudelaire constantly turned to his mother when he needed money or worried about his health or was bored – and he was always burdened with debts, partly because he tried to keep up the extravagant lifestyle of a dandy.

In the late 1840s, Baudelaire became involved in politics. He fought at the barricades during the revolution of 1848 and in the same year he also cofounded the journal Le Salut Public. He was associated with Proudhon and opposed the coup d’état of Louis-Napoleon Bonaparte in December 1851. After this tumultuous period, Baudelaire remained aloof from politics and adopted an increasingly reactionary attitude. In the 1850s he was involved with Marie Daubrun (1854-55) and Apollonie Sabatier (1857).

Baudelaire published his first novel, the autobiographical LA FANFARIO, in 1847. From 1852 to 1865 he was occupied in translating Edgar Allan Poe‘s writings. In Poe, Baudelaire found a kindred spirit. When his LES FLEURS DU MAL (The Flowers of Evil) appeared in 1857, all involved – author, publisher, and printer – were prosecuted and found guilty of obscenity and blasphemy. “You – hypocrite Reader – my double – my brother!” Six poems were deleted from the work. In the prefatory poem of The Flowers of Evil Baudelaire makes his reader as guilty of sins and lies as the poet: “If poison, arson, sex, narcotics, knives / have not yet ruined us and stitched their quick, / loud patterns on the canvas of our lives, / it is because our souls are still too sick. “As a contrast to his morbid images of perils of modern city the poem ‘Invitation to the Voyage’ calls to a distant land, where is nothing but “grace and measure, / richness, quietness, and pleasure.”

Baudelaire saw himself as a fallen angel. Love meant the loss of innocence – “faire l’amour, c’est faire le mal,” he wrote. But love is also the highest pleasure, doing evil intentionally is a source of lust. He felt sympathy for the prostitute, who revolts against the bourgeois family. Baudelaire once stated that “after examining scrupulously the depths of my past reveries, I realized that I have always been obsessed by the impossibility of understanding some of man’s actions or thoughts save by the hypothesis of the intervention of some exterior evil force.”

The second edition of The Flowers of Evil with new poems was published in 1861. At that time Baudelaire was also known as a critic. Among his friends was Édouard Manet (1832-83), whose works were frequently rejected by the salon jury. After the Salon of 1845, Baudelaire prohesized: “He shall be the true painter who can pull out of everyday life its epic side and make us understand just how great and poetic we are in our neckties and polished boots.” Manet also found a defender from his friend Émile Zola. “Goya,” Baudelaire wrote in The Painter of Modern Life (1863), “is always a great and often a terrifying artists.” Goya’s etchings also inspired some of his poems in Les fleurs du mal.

In 1862 a minor stroke or some other sudden sign of deteriorating health gave him a “warning” of the consequences of alcohol, opium, and hashish. In the same year Manet painted Jeanne’s portrait, ‘La Maïtresse de Baudelaire’.The remaining years of Baudelaire’s life were darkened by despair and financial difficulties. He returned to Paris in 1864 from an extended stay in Brussels and stayed in a sanatorium. His hatred against the Belgians Baudelaire poured in a pamphlet entitled PAUVRE BELGIQUE! He died in a Paris clinic of aphasia and hemiplegia on August 31, 1867, in his mother’s arms. In a letter to her he had written: “We’re obviously destined to love one another, to end our lives as honestly and gently as possible. And yet, in the awful circumstances in which I find myself, I’m convinced that one of us will kill the other.” The posthumous edition of Flowers of Evil appeared in 1868, and added more than 25 new poems. Baudelaire had a deep influence on a generation of poets in the late 19th century, coming into vogue at a time when “art for art’s sake” was a dogma. In England he was advertised by Swinburne (1837-1909). In his essay T.S. Eliot, a religious person himself, sees that Baudelaire’s Satanism was the product of partial belief. “What is significant about Baudelaire is his theological innocence. He is discovering Christianity for himself; he is not assuming it as a fashion or weighing social or political reasons, or any other accidents. He is beginning, in a way, at the beginning; and being a discoverer, is not altogether certain what he is exploring and to what it leads…” (Eliot in Selected Essays, new edition, 1960)

I reign in the blue sky like an understood sphinx;
I have both a heart of snow and the whiteness of a swan;
I hate any movement that displaces the lines,
And I never weep and I never laugh.
(from ‘La Beauté’, tr. Kenneth Koch, from Making Your Own Days, 1999)

Although Baudelaire is chiefly known from his poems, his critical essays have also gained attention of researchers. His essays on art have been published under the collective title CURIOSITÉS ESTHÉTIQUES, and those on literature and music under the title L’ART ROMANTIQUE. Baudelaire’s starting point for his aesthetic analysis was the lived experience, not principles of aesthetics or abstract preconceptions about the beautiful. In 1846 he condemned philosophical poetry as “a false genre” and saw that art has its value in itself. “In recent years we have heard it said in thousand different ways, ‘Copy nature; just copy nature.’ … And this doctrine (the enemy of art) was alleged to apply not only to painting but to all the arts.” He was impressed by Wagner’s music, enthusiastic of Poe, fascinated by the suggestiveness of caricatures, but unsympathetic to Courbet and realism. In an article he noted the emergence of photography with disdain. Realism was for Baudelaire a “disgusting insult thrown into the face of all analysts” and photography continued this belief in Nature: “A revengeful God has given ear to the prayers of this multitude, Daguerre was his Messiah.”

The Flowers of Sickness and Evil

The Poems and Prose Poems