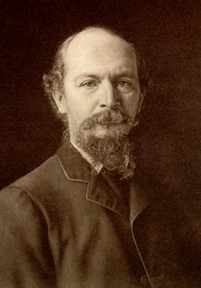 Swinburne attended Eton and then Balliol College, Oxford, where he met William Morris, Edward Burne-Jones and Gabriel Rossetti. He left Oxford without a degree and travelled on the Continent for a while, an allowance from his father enabling him to pursue his interests without the necessity of earning a living.

His first book, The Queen Mother; Rosamund (1860) went unnoticed, but he scored a considerable success five years later with Atalanta in Calydon. Both Tennyson and Browning wrote to express their admiration for this play, which displays the rhythmic inventiveness and energy characteristic of Swinburne’s best work. This triumph was eclipsed the following year by the first book of his Poems and Ballads series, which met with outrage and admiration in about equal proportions. The poems’ emphasis on masochism and flagellation can be traced back to the poet’s experiences at Eton, and the response from many Victorian reviewers was predictable. His rejection of Christianity also incensed his critics and delighted many of his young admirers, who included Thomas Hardy.

Swinburne’s lifestyle was as energetic and extravagant as his poetry, and his excesses led to a serious breakdown in 1879. He was placed in the care of his friend Theodore Watts-Duncan, who persuaded him to moderate his habits. Swinburne’s health improved and he became a more respectable figure. He was still writing prolifically, but his late poetry shows evidence of a talent in decline.

A Leave-Taking (No Comments »)