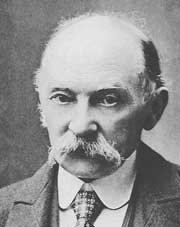 Thomas Masterson Hardy (2 June 1840 – 11 January 1928) was a novelist and poet, generally regarded as one of the greatest figures in English literature.

Thomas Hardy was born near Dorchester in Dorset. His father was a stonemason. His mother was ambitious and well-read and supplemented his formal education. Hardy trained as an architect in Dorchester before moving to London to take up employment. He won prizes from the Royal Institute of British Architects and the Architectural Association.

His first novel, The Poor Man and the Lady, was finished in 1867 but failed to find a publisher. Desperate Remedies (1871) and Under the Greenwood Tree (1872) were published anonymously. In 1873, A Pair of Blue Eyes was published under his own name. The story draws on Hardy’s courtship of Emma Gifford whom he married in 1874. His next novel, Far from the Madding Crowd (1874) was successful enough for Hardy to be able to give up his architectural work and take up a full-time literary career.

Over the next 25 years, Hardy produced 10 more novels. The Hardys moved from London to Yeovil, and then to Sturminster Newton, where he wrote The Return of the Native (1878). In 1885, they returned to Dorchester, moving into Max Gate, a house which Hardy had designed himself.

Tess of the d’Urbervilles (1891) attracted criticism for its sympathetic portrayal of a ‘fallen woman’ and was initially refused publication. Its subtitle, A Pure Woman, was intended to raise the eyebrows of the Victorian middle-classes and did so. His next major novel, Jude the Obscure (1895) caused an uproar. It was heavily criticized for its apparent attack on the institution of marriage. The book caused further strain on Hardy’s already difficult marriage due to Emma’s concern that it would be read as autobiographical. Some booksellers sold the novel in brown paper bags and the Bishop of Wakefield is reputed to have burnt a copy. Disgusted with the public reception of two of his greatest works, Hardy gave up writing novels altogether.

In 1898, Hardy published his first volume of poetry, Wessex Poems, a collection of poems
written over the previous 30 years. His poetry was not as well received by his contemporaries as his novels had been, but Hardy continued to publish collections until his death in 1928.

Although Hardy had been estranged from his wife for some years, her sudden death in 1912
had a traumatic effect on him. He made a trip to Cornwall to revisit places linked with her and their courtship and wrote a series, Poems 1912-13, exploring his grief. In 1914 he married Florence Dugdale, 40 years his junior, whom he had first met in 1905.

Hardy fell ill in December 1927 and died in January 1928, dictating his final poem to his wife on his deathbed. His funeral, on 16 January at Westminster Abbey, was a controversial occasion: his family and friends had wished him to be buried at Stinsford, but his executor, Sir Sydney Carlyle Cockerell, had insisted he should be placed in Poets’ Corner. A compromise was reached, whereby his heart was buried at Stinsford and his ashes were interred in the abbey.

Hardy’s novels, stories and many of the poems take place in the “partly-real, partly-dream” county of Wessex (named after the Anglo-Saxon kingdom which existed in the area). The landscape was modelled on the real counties of Berkshire, Devon, Dorset, Hampshire, Somerset and Wiltshire, with fictional places based on real locations. One of his distinctive achievements is to have captured the cultural atmosphere of rural Wessex in the golden epoch that existed just before the impact of the railways and the industrial revolution was to change the English countryside for ever.

His works are often deeply pessimistic and full of bitter irony, in sharp contrast to the prevalent Victorian optimism. His writing is sometimes rough and even inelegant but at its best is capable of immense power. Critical response to Hardy’s poetry has warmed considerably, in part because of the influence of Philip Larkin. Hardy’s cottage at Brockhampton and Max Gate in Dorchester are owned by the National Trust.

Biography By: This article is licensed under the GNU Free Documentation License and uses material adapted in whole or in part from the Wikipedia article on Thomas Hardy.

Epitaph On A Pessimist (No Comments »)

Poems of the Past and the Present

Wessex Poems and Other Verses

Thoughts Of Phena (No Comments »)