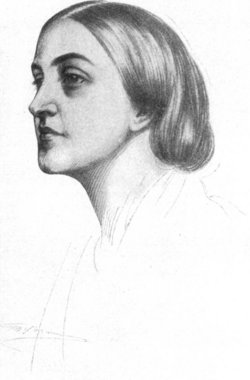 Christina Georgina Rossetti (December 5, 1830 – December 29, 1894) was an English poet and the sister of Dante Gabriel Rossetti. Their father, Gabriele Rossetti, was a political asylum seeker from Naples, and their mother, Frances Polidori, was the sister of Lord Byron‘s friend and physician, John William Polidori.

Born in London and educated privately, she suffered ill-health in her youth, but was already writing poetry in her teens. Her engagement to a painter, James Collinson, was broken off because of religious differences (she was High Church Anglican). This experience is credited with inspiring her most popular poem ‘Remember’. Some believe she also rejected a somewhat less than reputable proposition from John Ruskin. (“Here’s friendship for you if you like; but love, –/No, thank you, John.”)

She produced her first published verse under the pseudonym Ellen Alleyne. Many of her poems were aimed at children. Christina rejected the social world of her brother’s “Pre-Raphaelite Brotherhood”, preferring “my shady crevice — which crevice enjoys the unique advantage of being to my certain knowledge the place assigned me.”

Biography By: This article is licensed under the GNU Free Documentation License and uses material adapted in whole or in part from the Wikipedia article on Christina Rossetti.

Goblin Market and Other Poems

Song (She Sat And Sang Alway) (No Comments »)