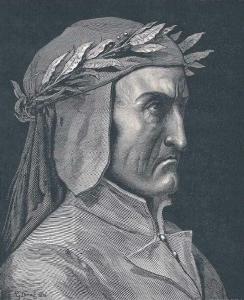 Dante Alighieri is beyond doubt the greatest of Italian poets, and, many readers think, one of the greatest poets that Western civilization has produced. W. B. Yeats called him “the chief imagination of Christendom.” T. S. Eliot said: “Dante and Shakespeare divide the modern world between them. There is no third.”

He was born in Florence, Italy, in 1265. Italy in those days was not a united country, but a collection of mostly small city-states. Feuds and power struggles between noble families were a constant source of wars between states and of turmoil and civil war within them. Dante, heir of a poor but noble family, was one of the seven elected officials in charge of the government of Florence, when an accidental collision in the street during the May Festival in 1300 led to a brawl that escalated into a civil war that ultimately got Dante’s party overthrown and its leaders (including Dante) exiled from Florence. He spent the rest of his life in exile, pining for his native city.

In 1293 he published a book called the Vita Nuova (“The New Life”), in which he relates how he fell in love with a young girl (Beatrice), and found his chief happiness in thinking of her, and looking at her from afar. In 1304 or shortly thereafter he published De Vulgari Eloquentia, an argument for writing poems and other works in the language that people speak (in his case, Italian) rather than in Latin. At the same time he wrote Il Convivio (“The Banquet”), in which he discusses grammar, and styles of poetry, and complains that his own poems, and in particular some of the things he said in the Vito Nuova, have been much misunderstood. In 1313 he published De Monarchia (“On Monarchy” or “A Treatise on Government”), in which he argued that the authority of a secular prince is not derived from the authority of the church, and is not given him by the pope, but comes directly from God (although in his exercise of it he ought, like every other Christian, to be guided by the moral instruction of the spiritual authority).

When he began writing his masterpiece, the Commedia, we do not know. (A “comedy,” as traditionally defined, is a story that “begins in sorrow and ends in joy”. Dante called his work simply “The Comedy.” Later Italian writers speaking of the work called it “The Divine Comedy,” by which name it is usually known today.) It appears that he had finished the first of its three parts by 1314, and the last only shortly before his death on 14 September 1321.

The plot of the Comedy is straightforward. It begins with Dante lost and walking in a Dark Wood, unable to remember how he got there or how long he has been walking. He sees a mountain and tries to get out of the wood by climbing it, but is driven back by three beasts that bar his path. He runs in panic, sees a man approaching, and asks for help. The man replies: I am the poet Virgil. You cannot get out of the wood by climbing the mountain. You must follow me, and I will take you the long way round. Your Lady Beatrice has sent me to guide you, through the depths of Hell and up the slopes of Purgatory, to meet her in the country of the Blessed.” Dante then follows Virgil, who conducts him through Hell, a vast funnel-shaped region under the surface of the earth, with a series of terraces that form ever-narrowing circles on which various kinds of evil deeds are punished, down to the center. They reach the tip of the funnel, located at the center of the earth, “the point toward which all things down-weigh”, where the directions “up” and “down” are reversed, and find a small tunnel or pathway cut through the rock that leads them finally out on the other side of the earth, directly opposite Jerusalem, at the foot of Mount Purgatory, which is surrounded by cornices on which the seven basic kinds of inclination to sin are purged and corrected. They climb the mount and at its summit they find the earthly Paradise, the Eden from which our first parents were expelled when they turned aside from a relation of loving obedience to God and of loving trust in Him. There Beatrice meets Dante, and conducts him upward through the planetary spheres. Finally, he soars beyond the planets, beyond the stars, and beholds the whole company of Heaven assembled together, and is given a vision of the glory of God Himself. And here the poem ends.