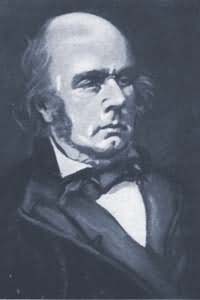 Edward Marlborough FitzGerald (March 31, 1809 – June 14, 1883) was an English writer, best known as the poet of the English translation of Rubáiyát of Omar Khayyám.

He was born Edward Purcell, at Bredfield House in Suffolk. His father, John Purcell, assumed in 1818 the name and arms of his wife’s family, the FitzGeralds. From 1816 the family lived at St Germain and at Paris, but in 1821 Edward was sent to school at Bury St Edmunds. In 1826 he went to Trinity College, Cambridge, where he joined the Cambridge Apostles. He became acquainted with William Makepeace Thackeray and William Hepworth Thompson. His friendship with Alfred Tennyson, also an Apostle, began in about 1835. In 1830 Fitzgerald left for Paris, but in 1831 was living in a farm-house on the battlefield of Naseby.

With no employment, FitzGerald lived quietly, moving to his native county of Suffolk, and never again leaving it for more than a week or two. Until 1835 the FitzGeralds lived at Wherstead; from that year until 1853 the poet resided at Boulge, near Woodbridge; until 1860 at Farlingay Hall; until 1873 in the town of Woodbridge; and then until his death at his own house close by, called Little Grange. During most of this time FitzGerald was preoccupied with flowers, music and literature. He allowed friends like Tennyson and Thackeray to surpass him, and for a long time showed no intention of emulating their literary success. In 1851 he published his first book, Euphranor, a Platonic dialogue, born of memories of the old happy life at Cambridge. In 1852 he published Polonius, a collection of “saws and modern instances”, some of them his own, the rest borrowed from the less familiar English classics. FitzGerald began the study of Spanish poetry in 1850, when he was with Professor EB Cowell at Elmsett and that of Persian at the University of Oxford in 1853. In middle life, he married Lucy, the daughter of Bernard Barton, the Quaker poet.

In 1853, he issued Six Dramas of Calderon, freely translated. He now turned to Oriental studies, and in 1856 he anonymously published a version of the Sálamán and Absál of Jámi in Miltonic verse. In March 1857 the name with which he has been so closely identified first occurs in FitzGerald’s correspondence–“Hafiz and Omar Khayyám ring like true metal.”, On January 15, 1859 a little anonymous pamphlet was published as The Rubaiyat of Omar Khayyam. In the world at large, and in the circle of FitzGerald’s particular friends, the poem seems at first to have attracted no attention. The publisher allowed it to gravitate to the fourpenny or even (as he afterwards boasted) to the penny box on the bookstalls.

But in 1860 Rossetti discovered it, and Swinburne and Lord Houghton quickly followed. The Rubaiyat became slowly famous, but it was not until 1868 that FitzGerald was encouraged to print a second and greatly revised edition. Meanwhile he had produced in 1865 a version of the Agamemnon, and two more plays from Calderón. In 1880-1881 he issued privately translations of the two Oedipus tragedies; his last publication was Readings in Crabbe, 1882. He left in manuscript a version of Attar’s Mantic-Uttair under the title of The Bird Parliament.

From 1861 onwards FitzGerald’s greatest interest had been in the sea. In June 1863 he bought a yacht, “The Scandal,” and in 1867 he became part-owner of a herring-lugger, the “Meum and Tuum.” For some years, till 1871, he spent the summer months “knocking about somewhere outside of Lowestoft.” In this way, and among his books and flowers, FitzGerald gradually became an old man. He passed away painlessly in his sleep. He was “an idle fellow, but one whose friendships were more like loves.” In 1885 his fame was increased by the fact that Tennyson dedicated his Tiresias to FitzGerald’s memory, in some touching reminiscent verses to “Old Fitz.” This was but the signal for that universal appreciation of Omar Khayyám in his English version. The melody of FitzGerald’s verse is so exquisite, the thoughts he rearranges and strings together are so profound, and the general atmosphere of poetry in which he steeps his version is so pure, that no surprise need be expressed at the universal favour which the poem has met with among critical readers. It became better known to the general public than any single poem of the time.

Of FitzGerald as a man practically nothing was known until, in 1889, Mr W. Aldis Wright, his intimate friend and literary executor, published his Letters and Literary Remains in three volumes. This was followed in 1895 by the Letters to Fanny Kemble. These letters constitute a fresh bid for immortality, since they discovered that FitzGerald was a witty, picturesque and sympathetic letterwriter. One of the most unobtrusive authors who ever lived, FitzGerald has, nevertheless, by the force of his extraordinary individuality, gradually influenced the whole face of English belles-lettres, in particular as it was manifested between 1890 and 1900.

The Works of Edward FitzGerald appeared in 1887.

Biography By: This article is licensed under the GNU Free Documentation License and uses material adapted in whole or in part from the Wikipedia article on Edward FitzGerald.