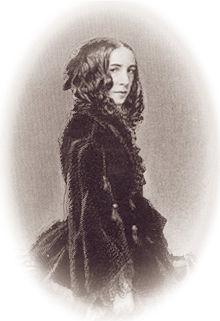 Her father, Mr. Barrett, was an English country gentleman. Possessing some means, he helped his daughter to acquire an excellent classical education; and, possessing considerable ability, he became, as she says, her public and her critic.

“Her studies were early directed to the poets of antiquity, and, under the guidance of her blind tutor, Boyle, whose name she always warmly cherished, she mastered the rich treasures of AEschylus. The sublime Grecian possessed for her a charm which was only equaled by the fascination held over her wondering spirit by Shakespeare.” While she was profoundly versed in Greek literature, and intimately acquainted with all the Attic writers in tragedy and comedy, she was thoroughly versed in pure and undefiled English. In her extensive correspondence with contemporaries, she shows a thorough knowledge of English literature, from Chaucer to her own time.

Physically she was very delicate, but nature made up for her fragile frame by giving her a superior mental and spiritual organization. Miss Mitford, her intimate friend, describes her as a “slight, delicate figure, with a shower of dark curls falling on each side of a most expressive face, large tender eyes, richly fringed by dark eyelashes, and a smile like a sunbeam.” Such, in brief, is a description of the attainments and person of the lady who, according to E. C. Stedman, was not only “the greatest female poet that England has produced, but more than this, the most inspired woman so far as known, of all who have composed in ancient or modern tongues or flourished in any land or clime.”

Almost before her childhood had passed, she showed remarkable preferences for the arts, but especially for the poetic art. Some of her poems written before she was fifteen, show strong marks of genius, and are worthy of preservation. Her first publication was an “Essay on Mind, and other Poems.” This, it is said, was written in her seventeenth year. In 1833 appeared her excellent translation of “Prometheus;” 1838, her second volume of original poetry, “The Seraphim, and other poems;” and in 1839, “The Romance of the Page.”

While thus busily engaged in her work, she met with a personal calamity. A blood-vessel burst in her lungs, which forced her to remain at home close confinement for some time. At length her physician ordered that she be removed to a milder climate. In company with friends she went to reside at Torquay. At that place an accident occurred which saddened her life, and gave a deeper hue of thought and feeling to her poetry. Her favorite brother and two friends were taking a pleasure ride on a small vessel when the boat sank, and all on board were drowned. The shock caused a severe sickness, from which she never entirely recovered. It was a year before she was able to be removed to her father’s house in London. For many years she remained in a darkened chamber, and received no visitors except her own family and a few devoted friends. While thus secluded from the outward world, she read extensively the valuable books in almost every language.

In 1844 she came forth from her seclusion in two volumes of “Poems by Elizabeth Barrett.” The melancholy thought showed traces of the sadness of much of her former life.

In 1846, her thirty-seventh year, she was married to Robert Browning, noted English poet. In hopes of finding health, Mr. Browning removed to Italy. His wish was gratified, for under the sunny skies of Florence, his wife found the health which had forsaken her in her native land. In her adopted home she remained till her death.

The revolutionary outbreak in 1848, furnished the theme for her next work. “Casa Guidi Windows” is a poem relating to the impressions that were made upon her mind by the events which she saw from the windows of her house in Florence. It shows great warmth of feeling for the Italians. In 1856 “Aurora Leigh” was published. This is a novel in blank verse, which the poetess declared to be her most mature work. While the poem is full of splendid passages, yet as a whole it is not considered satisfactory. It contains a prodigality of genius, with discordant mixture of material. Notwithstanding the lack of unity, which is so essential for a poem of such magnitude, a large number of critics consider “Aurora Leigh” the chief source of Mrs. Browning’s fame. But perhaps an equal number look upon “Casa Guidi Windows” as “containing her ripest growth and greatest intellectual strength.” Indeed the circumstances under which this poem was written, were such as to call out her best efforts. She was looking from her window, and beholding the Italians struggling for freedom. Being in full sympathy with them, her utterances were in accordance with her heart–they were lavish and unrestrained. In 1860 appeared her last publication, “Poems Before Congress,” which evinced her deep interest in the people of Italy. She died in the following year, and a marble tablet in front of the villa of the Brownings records that in it wrote and died Elizabeth Barrett Browning, who, by he songs, created a golden link between Italy and England, and that in gratitude Florence had erected that memorial.
“Last Poems,” published in 1862, contained the literary remains of the priestess of English poetry.

Some of her poems are especially admired. “Cowper’s Grave,” “The Cry of the Children,” “A Child Asleep,” and “He Giveth His Beloved Sleep,” are jewels that shine with the brilliancy of the sun.

Her genius was perhaps as great as that of any poet of her generation, but circumstances retarded its highest possible development. In certain intellectual qualities she was inferior to Tennyson, and the author of “Sordello”, but in others she was their superior. Be her exact niche, however, what it may, she occupies a favored place in English literature, and is undoubtedly one of the few leading poets of the nineteenth century. Her poetry is that which refines, chastens, and elevates.

Sonnets from the Portuguese

The Best Thing In The World (No Comments »)