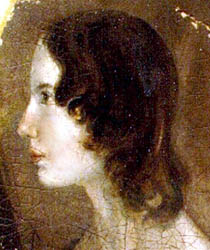 Emily Brontë (July 30, 1818 – December 19, was a British novelist and poet, best remembered for her one novel Wuthering Heights, an acknowledged classic of English literature.

Emily was born at Thornton in Yorkshire, the younger sister of Charlotte Brontë and the fifth of six children. In 1820, the family moved to Haworth, where Emily’s father was rector, and it was in these surroundings that their literary talent flourished. In childhood, after the death of their mother, the three sisters and her brother Branwell created imaginary lands (Gondal, Angria, Gaaldine), which featured in stories they wrote. Few of Emily’s work from this period survives, except for poems spoken by characters (The Brontës’ Web of Childhood, Fannie Ratchford, 1941).

In 1837, Emily commenced work as a governess at Law Hill, near Halifax. Later, with her sister Charlotte, she attended college in Brussels.

It was the discovery of Emily’s poetic talent by her family that led her and her sisters, Charlotte and Anne, to publish a joint collection of their poetry in 1845. Owing to the prejudices on female writers, all three used male pseudonyms, Emily’s being “Ellis Bell”.

She subsequently published her only novel, Wuthering Heights, in 1847. Although it received mixed reviews when it first came out, the book subsequently became an English literary classic.

Like her sisters, Emily’s constitution had been weakened by their harsh life at home and at school. She died on December 19, 1848 of tuberculosis, having caught a chill during the funeral of her brother in September, and was interred in the Church of St. Michael and All Angels Cemetery, Haworth, West Yorkshire, England.