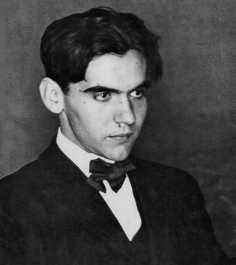 Federico García Lorca (June 5, 1898 – August 19, 1936) was a Spanish poet and dramatist, also remembered as a painter, pianist, and composer. An emblematic member of the Generation of ’27, he was murdered by Nationalist partisans at the age of 38 at the beginning of the Spanish Civil War. Today he is recognised as one of the great artists of modern Spain.

Born into a family of minor landowners in the village of Fuente Vaqueros, Granada, García Lorca was a precocious child but did not excel at school. In 1909 he moved with his family to the city of Granada where in time he became deeply involved in local artistic circles. His first collection of poems, Impresiones y paisajes, was published in 1918 to local acclaim but little commercial success.

Associations made at Granada’s Arts Club were to stand him in good stead when he moved in 1919 to the famous Residencia de estudiantes in Madrid. At university he would befriend Luis Buñuel and Salvador Dalí, amongst many others who were or would become influential artists in Spain. Some have claimed he and Dalí were lovers, although serious critics tend to be very sceptical of this. Here he met Gregorio Martínez Sierra, the Director of Madrid’s Teatro Eslava, at whose invitation he wrote and staged his first play, El maleficio de la mariposa, in 1919-20. A verse play dramatising the impossible love between a cockroach and a butterfly, with a supporting cast of other insects, it was laughed off stage by an unappreciative public after only four performances and soured Lorca’s attitude to the theatre-going public for the rest of his career — he would later claim that 1927’s Mariana Pineda was his first play.

Over the next few years García Lorca became increasingly involved in his art and Spain’s avant-garde. He published three further collections of poems including the Romancero Gitano (1928, translated as ‘Gypsy Ballads’, 1953), his best known book of poetry, and his second play Mariana Pineda opened to great acclaim in Barcelona in 1927.

However, towards the end of the 1920s García Lorca fell victim to increasing depression, a situation exacerbated by his anguish over the increasingly unsuccessful concealment of his homosexuality from friends and family. In this he was deeply affected by the success of his Romancero Gitano which increased, through the celebrity it brought him, the painful contrast between the persona of the successful author that he was forced to maintain in public and the tortured self he could only acknowledge in private. Growing estrangement between Lorca and his closest friends reached its climax when the two Surrealists Dalí and Buñuel collaborated on the film Un chien andalou (“An Andalusian Dog”, 1929) which Lorca interpreted, perhaps erroneously, as an allusion to, even attack on, him. At the same time his intensely passionate but fatally one-sided affair with the sculptor Emilio Aladrén was collapsing as the latter became involved with his future wife. Aware of these problems (though not perhaps of their causes), Lorca’s family arranged for him to take a lengthy tour of the United States in 1929-30.

García Lorca’s stay in America, particularly New York — his first adult experience of a democratic society, albeit one he considered to be dominated by rampant commercialism and the casual social oppression of minority groups — acted as a catalyst for some of his most daring work. His collection of poems, Poeta en Nueva York, explores his alienation and isolation through some graphically experimental poetic techniques, and the two plays Así que pasen cinco años and El público were far ahead of their time — indeed, El público was not published until the late 1970s.

His return to Spain in 1930 coincided with the fall of the dictatorship of Primo de Rivera and the re-establishent of the Spanish Republic. In 1931 Lorca was appointed Director of the government-sponsored student theatre company, La Barraca, whose remit was to tour Spain introducing (predominantly rural) audiences to ‘classic’ Spanish theatre. While touring with La Barraca Lorca wrote his best-known plays, the ‘rural trilogy’ of Bodas de sangre (“Blood Wedding”), Yerma and La casa de Bernarda Alba.

When war broke out in 1936, García Lorca left Madrid for Granada, even though he was aware that he was almost certainly heading toward his death in a city reputed to have the most conservative oligarchy in Andalucía. García Lorca and his brother-in-law, who was also the socialist mayor of Granada, were soon arrested. He was executed, shot by Falange militia on August 19, 1936 and thrown into an unmarked grave in or around Víznar, near Granada. The Franco regime placed a general ban on his work, which was not rescinded until 1953 when a (heavily censored) Obras completas was released. Even then, it was only after Franco’s death in 1975 that Lorca’s life and death could be openly discussed. It took until the 1990s for his sexual orientation to be acknowledged, and then only by scholars and biographers.

In 1986 Leonard Cohen’s English translation of the poem “Pequeño vals vienés” by Lorca reached #1 in the Spanish single charts (as “Take This Waltz”, music by Cohen).

Today, García Lorca is honored by a statue prominently located in Madrid’s Plaza de Victoria. Political philosopher David Crocker reports that “the statue, at least, is still an emblem of the contested past: each day, the Left puts a red kerchief on the neck of the statue, and someone from the Right comes later to take it off.”