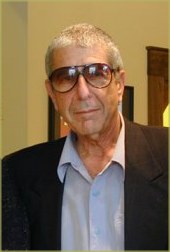 Leonard Norman Cohen (born September 21, 1934 in Montreal, Quebec) was a Canadian poet and novelist, and a well-known singer/songwriter. Cohen’s lyrics are often emotionally heavy and lyrically complex, owing more to the metaphoric word play of poetry than to the conventions of folk music.

His early songs are in a folk-influenced style; beginning in the 1970s his work began to be influenced by various types of rock music and cabaret music. Cohen typically sings in a deep bass register, with female backing vocals.

Cohen’s music has become very influential to other singer/songwriters and hundreds of cover versions of his work have been recorded.

Cohen was born to a middle-class Jewish family in Montreal. His father worked as a tailor. They made a proud claim to descent from the priestly Kohanim: “I had a very Messianic childhood,” he told Richard Goldstein in 1967, “I was told I was a descendant of Aaron, the high priest.” As a teenager he learned to play the guitar and formed a country/folk group called the Buckskin Boys.

In 1951, Cohen enrolled at McGill University, where he was President of the debating union and pursued a career as a poet. His first poetry book, Let Us Compare Mythologies (1956), was published while he was an undergraduate. The Spice-Box of Earth (1961) made him well-known in poetry circles, especially in his native Canada.

After moving to Hydra, a Greek island, Cohen published the poetry collection Flowers for Hitler (1964), and the novels The Favorite Game (1963) and Beautiful Losers (1966). The Favorite Game is an autobiographical ‘bildungsroman’ about a young man finding his identity in writing. In contrast, Beautiful Losers can be considered as an ‘anti-bildungsroman’ since it – in an early post-modern fashion – deconstructs the identity of the main characters by means of combining the sacred and the profane, religion and sexuality in a rich, lyrical language. Reflecting Cohen’s Quebecois roots, but perhaps unusually for someone from a Jewish background, a secondary plot in Beautiful Losers concerns Tekakwitha, the Roman Catholic Iroquois mystic. For a good survey of Cohen’s written works see Leonard Cohen by Steven Scobie (Vancouver: Douglas & McIntyre, 1978).

In 1967, Cohen relocated to the United States to pursue a career as a folk singer/songwriter. His song “Suzanne” became a hit for Judy Collins, and after performing at a few folk festivals, Cohen was discovered by John Hammond, the same Columbia Records representative who discovered Bob Dylan and Bruce Springsteen, among others.

The sound of Cohen’s first album Songs of Leonard Cohen (1967) was much too downtrodden to be a commercial success but was widely acclaimed by folk music buffs and by Cohen’s peers. He followed up with Songs from a Room (1969) (featuring the often-covered “Bird on the Wire”), Songs of Love and Hate (1971), and New Skin for the Old Ceremony (1974). His recorded sound became a bit more accessible through the use of background vocalists.

Throughout the late 1960s and early 1970s, Cohen toured the United States, Canada and Europe. In 1973, Cohen toured Israel and performed at army bases during the Yom Kippur War. Beginning around 1974, his collaboration with pianist/arranger John Lissauer created a live sound that was almost universally praised by the critics, but never really captured on record. During his time, Cohen often toured with Jennifer Warnes as a back-up singer. Warnes would become a fixture on Cohen’s future albums and would even record an album of Cohen songs in 1987, Famous Blue Raincoat.

In 1977, Cohen released an album called Death of a Ladies’ Man (note the plural possessive case; one year later in 1978, Cohen released a volume of poetry with the coyly revised title, Death of a Lady’s Man). The album was produced by Phil Spector, well known as the inventor of the “wall of sound” technique, in which pop music is backed with thick layers of instrumentation – an approach much different than Cohen’s usually minimalistic instrumentation. The recording of the album was a complete fiasco. Spector reportedly mixed the album in secret studio sessions and Cohen said that he considered attempting to take the master tapes from Spector at gunpoint. The end result was a sound critics considered gaudy and ostentatious and Cohen’s songs were considered some of his weakest as well. In 1979, Cohen returned with the more traditional Recent Songs.

In 1984, Cohen released Various Positions, featuring the often-covered “Hallelujah”, but Columbia declined to release the album in the United States, where Cohen’s popularity had declined in recent years. (Throughout his career, Cohen’s music has sold better in Europe and Canada than in the U.S. – He once satirically expressed how touched he is at the modesty the American company has shown in promoting his records.)

In 1987, Jennifer Warnes’ tribute album Famous Blue Raincoat helped restore Cohen’s carreer in the U.S., and the following year he released I’m Your Man, which marked a drastic change in his music. Synthesizers ruled the album, although in a much more subdued manner than on Death of a Ladies’ Man, and Cohen’s lyrics included more social commentary and dark humor. The album was Cohen’s most acclaimed and popular since Songs of Leonard Cohen, and “First We Take Manhattan” and the title song became two of his most popular songs.

He followed with another acclaimed album, The Future, in 1992. The Future showed a very bitter, almost misanthropic view of life. The grim, socially detached notes found in songs like “First We Take Manhattan” became an almost explicit cry of hatred expressed in songs like “The Miracle”, “The Future” and others. Cohen always maintained a cynical, outsider-like view of the world, which was expressed here in its extreme.

In 1993, following a tour to promote The Future, Cohen retreated to the Mount Baldy Zen Center near Los Angeles, California, beginning what would become six years of seclusion at the center. In 1996, Cohen was ordained as a Rinzai Zen Buddhist monk and took the Dharma name Jikan, meaning silent one. He left Mount Baldy in 1999.

Biography By: This article is licensed under the GNU Free Documentation License and uses material adapted in whole or in part from the Wikipedia article on Leonard Cohen.

Take This Waltz (No Comments »)