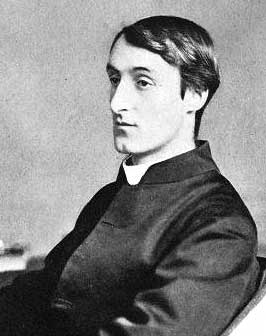 Gerard Manley Hopkins (July 28, 1844 – June 8, 1889) was a British Victorian poet and Jesuit priest, whose verse has been widely admired for the vividness of its expression.

Hopkins was born in London of Welsh ancestry. He was the son of an insurance agent, and was educated at Balliol College, Oxford, where he became a follower of Edward Pusey and a member of the Oxford Movement. It was also at Oxford that he forged the friendship with Robert Bridges which would be of importance in his development as a poet. In 1866, following the example of Newman, he converted to Roman Catholicism, and in 1868 he decided to enter the priesthood. In 1882 he became a teacher at Mount St. Mary’s College, Sheffield, and Stonyhurst College, Lancashire, from where he progressed to professor of Greek at University College Dublin, though remaining a priest.

During his lifetime, Hopkins published none of his poems. It was only through the efforts of his friend, Bridges, that his collected verse was published in 1918. These included The Wreck of the Deutschland (written in 1876), The Windhover and Pied Beauty. Today he is one of Britain’s most admired poets.

Much of Hopkins’ historical importance has to do with the changes he brought to the form of poetry. Prior to Hopkins most Middle English and Modern English poetry was based on a rhythmic structure inherited from the Norman side of English’s literary heritage. This structure is based on repeating groups of two or three syllables, with the stressed syllable falling in the same place on each repetition. Hopkins called this structure running rhythm, and though he wrote some of his early verse in running rhythm he became fascinated with the older rhythmic structure of the Anglo-Saxon tradition, of which Beowulf is the most famous example. Hopkins called this rhythmic structure sprung rhythm. Sprung shythm is structured around feet with a variable number of syllables, generally between one and four syllables per foot, with the stress always falling on the first syllable in a foot.

Hopkins saw sprung rhythm as a way to escape the constraints of running rhythm, which he said inevitably pushed poetry written in it to become “same and tame.” Many contemporary poets have followed Hopkins’ lead and abandoned running rhythm, though most have not adopted sprung rhythm but have instead abandoned traditional rhythmic structures all together, adopting free verse instead.

Biography By: This article is licensed under the GNU Free Documentation License and uses material adapted in whole or in part from the Wikipedia article on Gerard Manley Hopkins.