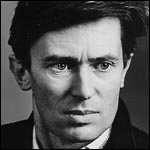 Hugo Williams was born in 1942 in Windsor and grew up in Sussex. He is a poet, journalist and travel writer. Williams was educated at Eton College and worked on the London Magazine from 1961 to 1970. He writes a column in the Times Literary Supplement, has been poetry editor and TV critc on the New Statesman, theatre critic on the Sunday Corrrespondent, film critic for Harper’s & Queen and a writer on popular music for Punch magazine.

His latest work, Collected Poems, which brings together work from eight books, was published in 2002. Hugo Williams lives in London.