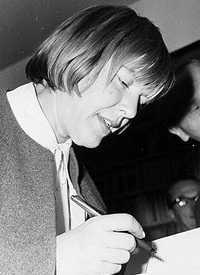 She was born in Klagenfurt, Carinthia on June 25, 1926. She studied philosophy, psychology and German philology in Vienna, and soon published the first short story. Her literary career was enforced by the contact with Hans Weigel (literateur and sponsor of young post-war literature) and the legendary literary circle known as Gruppe 47, members of which were also Ilse Aichinger, Paul Celan, Heinrich Böll, Marcel Reich-Ranicki and Günter Grass.

A job at the radio station Rot-Weiss-Rot enabled Bachmann to obtain an overview of contemporary literature and also supplied her with a decent income, making possible proper literary work. Furthermore, her first radio plays were published by the station.

In 1953, she transferred her main place of residence to Rome, Italy, where she spent the large part of the following years working on poems, essays, opera libretti and short stories which soon brought with them international fame and numerous awards. The relationship with Max Frisch (Swiss author, 1911-1991) took her to Switzerland and bestowed the role of the second protagonist in Frisch’s Mein Name sei Gantenbein upon her.

Bachmann’s work primarily focuses on themes like personal boundaries, establishment of the truth, and philosophy of language, the latter in the tradition of Ludwig Wittgenstein.

Ingeborg Bachmann died three weeks after a fire in the bedroom, on October 17, 1973 in a Roman hospital. The real cause of her death remains unsolved, the rumour is spread that she did not succumb to the burns but to her compulsive pill-taking which was prevented by the stay in hospital.

Biography By: This article is licensed under the GNU Free Documentation License and uses material adapted in whole or in part from the Wikipedia article on Ingeborg Bachmann.

In The Storm Of Roses (No Comments »)

Songs in Flight: The Collected Poems