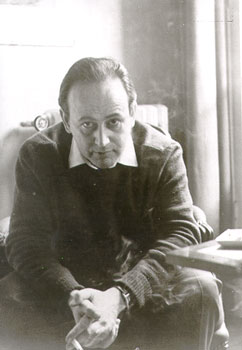 Paul Celan was the most frequently used pseudonym of Paul Antschel (the pseudonymous adopts an anagram of his surname in Romanian, Ancel) (November 23, 1920 – approximately April 20, 1970), who is considered one of the few major poets of the post-World War II era. He was born in Romania, lived in Austria and later France, and wrote in German. In additional to the composition of his poetry, he was an extremely active translator, translating literature from Romanian, French, Portuguese, Russian, and English into German.

Celan was born into a German-speaking Jewish family in Czernowitz, in the region of Bukovina, then part of Romania. The city, which had belonged to the Austro-Hungarian Empire until World War I, was occupied by the Soviets in September 1940 following the Nazi-Soviet pact, reoccupied by fascist Romania in June 1941, and later be annexed by the Soviet Union following the counter-offensive and of 1944 and today belongs to Ukraine, being called Chernivtsi. His family was Orthodox Jewish. His father, Leo, was a Zionist who advocated his son’s education in Hebrew at Safah Ivriah, an institution previously convinced of the wisdom of assimilation into Austrian culture which favourably received Chaim Weizmann of the World Zionist Organization in 1927. His mother, Fritzi, was an avid reader of German literature who insisted that such German was the language of the house. After his Bar Mitzvah in 1933, Paul abandoned Zionism to some extent and terminated his formal Hebrew education, becoming active for a while in Jewish Socialist organizations and supported the Republican cause in the Spanish Civil War. His aunt Minna, who lived with his family in Czernowitz, emigrated to Palestine in 1934. His earliest known poem, titled “Mother’s Day 1938” was a sentimental if earnest profession of love.

In 1938, Celan travelled to Tours, France to study medicine (Romanian university quotas on Jewish students and the Anschluss precluded Bucharest and Vienna), but returned to Czernowitz in 1939 to study literature and Romance languages. His journey to France took him by way of Berlin as Kristallnacht happened and introduced him to his uncle, Bruno Schrager, who later was among the French detainees to Auschwitz who died at Birkenau. The Soviet occupation in June 1940 deprived Celan of any illusions about Stalinism and Soviet Communism which may have lingered from his earlier socialist engagements; the Soviets quickly imposed bureaucratic reforms in the university where he was studying Romance philology, and the Red Army brought deportations to Siberia before the Germans and Romanians brought ghettos, internment, and forced labour a year later. On arrival in July 1941 the German SS Einsatzkommando and their Romanian compatriots and Romanians burned down the city’s six-hundred-year-old Great Synagogue, deporting a number of Jews and forcing the rest of the community into a ghetto, where Celan was exposed to Yiddish songs, translated Shakespeare’s sonnets, and continued to write his own poetry. Before the ghetto was dissolved in the fall of that year, Celan was pressed into labor cleaning up first the debris of demolished post office and then gathering and destroying Russian books.

The local mayor mitigated these arrangements until the governor of Bukovina began to have Jews rounded up and deported starting with the Saturday nights of June 1942. Accounts of his whereabouts on that night vary, but it is certain that Celan was not with his parents where they were taken from their home on June 27, 1942 and sent by truck and then train to an internment camp in Transnistria, where two-thirds of the deportees perished. Later taken by forced march to labour camps in Wallachia and Moldavia, he received reports in the late fall or winter of 1942-1943 that his father died of typhus in fall 1942 and his mother was later shot dead after being exhausted beyond further forced labour. Paul escaped from the labour camps until February 1944, when the Red Army’s advance caused the Germans to abandon them, returning to Czernowitz shortly before the Soviets returned to reassert their control. Early versions of “Todesfuge” were circulated at this time, demonstrating that the poem relied on accounts coming from the camps in Poland liberated by the Soviets. Friends from this period recall expression of immense guilt on his separation from his parents before their death.

Amidst musings on a possible emigration to Palestine and Soviet activities variably tolerating and inciting Antisemitism, in 1945 Celan left Soviet occupied territory for Bucharest, Romania, where he remained until 1947, active in the Jewish literary community as a translator of Russian literature into Romanian and a poet, publishing his work under a variety of pseudonyms. The literary scene of the time was amply populated with surrealists, and it was in this period that Celan developed pseudonyms both for himself and his friends, including the one he took as his pen name. A version of “Todesfuge” appeared as “Death Tango” in a Romanian translation in May 1947. Such was the surrealist ferment of the time that additional remarks were published with it indicating that the dancing and musical performances of the poem were realities of the concentration camp life (Night and Fog, for example, includes a picture of the Auschwitz Orchestra, an institution organized by SS order, which was required to assemble and play selections, including dances and popular songs, made by the Germans; one may further recall the SS man interviewed by Lanzmann for Shoah who rehearsed the songs prisoners were made to sing in the death camp, remarking immediately that no Jews taught that song survived). As Romanian autonomy crumbled in the course of that year, Paul fled Romania for Vienna, Austria. It was there that he befriended Ingeborg Bachmann, who had just completed a dissertation on Martin Heidegger. Facing a city divided between occupying powers and littling resembled the mythic city of an Austro-Hungarian Jewish community shattered by Kristallnacht, he moved to Paris in 1948, where he found a publisher for his first poetry collection, Der Sand aus den Urnen (Sand from the Urns). In November 1951, he met the graphic artist Gisèle Lestrange, in Paris. They married on December 21st, 1952 despite the opposition of her aristocratic family and during the following 19 years they wrote over 700 letters. He made his living as a translator and lecturer in German at the École Normale Supérieure. Celan became a French citizen in 1955 and lived in Paris until his death by suicide, drowning in the Seine on or about April 20, 1970.

He visited Germany periodically. This included a lecture at the University of Freiburg on July 24, 1967, which was attended by Heidegger, who gave him a copy of Was heißt Denken? and invited him to visit his hut at Todtnauberg the following day and walk in the Schwarzwald, where Heidegger spoke of the interview “Only a God can save us now”, which he had just given to Der Spiegel on condition of posthumous publication. Celan had read Heidegger beginning in 1951 and exclamation marks in his margin notes testify to his awareness that Heidegger had allowed his remarks on the “greatness” of National Socialism in the 1953 edition of Introduction to Metaphysics to stand without further comment. (Celan may have refused to be photographed with Heidegger after the Freiburg lecture because Heidegger still had not commented over a decade later.) “Todtnauberg” was written shortly thereafter and sent to Heidegger in the first copy of a limited bibliophile edition. Heidegger responded with no more than a letter of perfunctory thanks. Philippe Lacoue-Labarthe reproaches Heidegger’s silence on the extermination after 1945 as an “irreparable offense” and “unforgivable”, making particular reference to Celan’s pointed expression of

[a hope, today,
of a thinker’s
coming
word
in the heart]

The experience of the Shoah and his parents’ deaths are defining forces in Celan’s poetry and his use of language. In his Bremen Prize speech, Celan said of language after Auschwitz that:

Despite his declaration that language remains, it is indeed only remnants that are left him; even within the word “enriched,” “angereichert” (the quotations are Celan’s) lies buried the word Reich, just as its thousand years echo in the thousand darknesses of murderous speech – language, perhaps, has been “through” too much.

His most famous poem, the relatively early Death Fugue (Todesfuge in German), commemorates the death camps, negating Adorno’s famous assertion that “writing poetry after Auschwitz is barbaric.” Celan, always sensitive to criticism, took the dictum personally; his later poem,
“Engführung” (“Stretto” or “The Straitening”) was his own re-writing of “Death Fugue” into ever-more desperate language.

In later years his poetry became progressively more cryptic, fractured and monosyllabic, bearing comparison to the music of Webern. In the eyes of some, Celan attempted in his poetry either to destroy or remake the German language. The urgency and power of Celan’s work stems from his attempt to find words “after,” to bear (impossible) witness in a language that gives back no words “for that which happened.”

Biography By: This article is licensed under the GNU Free Documentation License and uses material adapted in whole or in part from the Wikipedia article on Paul Celan

The Riverside Anthology of Literature

The Triumph Of Achilles (No Comments »)