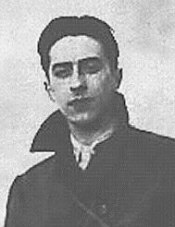 Despite his achievements in virtually all literary and artistic fields, Cocteau insisted that he was primarily a poet and that all his work was poetry. As a leading member of the surrealist movement, he had great influence on the work of others, including the group of composer friends in Montparnasse known as Les Six. However, despite the fact that the word surrealism was coined by Guillaume Apollinaire to describe Cocteau’s 1917 collaboration with Erik Satie, Pablo Picasso, and Léonide Massine Parade, self-proclaimed surrealist leader André Breton declared Cocteau a, “notorious false poet, a versifier who happens to debase rather than to elevate everything he touches.” (Breton, 1953)

On the sunny afternoon of August 12, 1916, Pablo Picasso and his new girlfriend, the fashion model Paquerette, Max Jacob, Manuel Ortiz de Zarate, Marie Vassilieff, Henri-Pierre Roché, Moise Kisling, Amedeo Modigliani and the critic André Salmon were all sitting together outside the café La Rotonde in Montparnasse. Their friend, Cocteau, recorded for posterity this extraordinary gathering of talent in a series of 21 photographs showing such characters as a dapper Picasso dressed à l’anglaise with a flat cap, cane and briar pipe. Girlfriend, Paquerette wore a long elegant dress and a very silly hat while Max Jacob at least looked as though he was sober and respectable and the tiny Marie Vassilieff appeared the formidable little lady she was.

In the 1930s, Cocteau had an unlikely affair with Princess Natalie Paley, the beautiful daughter of a Romanov grand duke and herself a major fashion-plate, sometime actress, model, and former wife of couturier Lucien Lelong. She became pregnant. To Cocteau’s distress and Paley’s lifelong regret, the fetus was aborted due to the intervention of Marie-Laure de Noailles, the arts patron who had loved Cocteau as a young woman and was determined to ruin his new romance. Cocteau’s most lasting relationship was with the handsome French actor Jean Marais, whom he discovered and cast in “Beauty and the Beast.”

In 1940 Le Bel Indifferent, Cocteau’s play written for and starring Edith Piaf, was enormously successful. He also worked with Picasso on several projects and was friends with most of the European art community. He struggled with opium addiction for most of his adult life and was openly gay, though he had at least one significant affair with a woman, Princess Natalie Paley (see below). He published a considerable amount of work criticising homophobia. Cocteau’s films, the bulk of which he both wrote and directed, were particularly important in introducing surrealism into French cinema.

Cocteau is best known for his 1929 novel Les Enfants Terribles, the 1934 play The Infernal Machine, and the 1945 film, Beauty and the Beast.

In 1955 he was made a member of the Académie française and The Royal Academy of Belgium.

Biography By: This article is licensed under the GNU Free Documentation License and uses material adapted in whole or in part from the Wikipedia article on Jean Cocteau.

The Cape of Good Hope

Preamble (A Rough Draft For An Ars Poetica) (No Comments »)