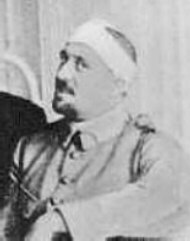 Born Wilhelm Albert Vladimir Apollinaris de Kostrowitzky/Kostrowicki in Rome, Italy, he was one of the many artists who worked in the Montmartre district of Paris during an era of great creativity. His mother was Angelica Kostrowicki, a Polish countess, his father possibly Francesco Flugi d”Aspermont, a Swiss-Italian aristocrat who disappeared early from Apollinaire’s life. Apollinaire was one of the most popular members of the artistic colony in Montparnasse, where his friends and collaborators during that period were Pablo Picasso, Jean Cocteau, Erik Satie, and Ossip Zadkine.

In 1911, he joined the Puteaux Group, an offshoot branch of the Cubist movement. On September 7 of the same year, he was arrested and put in jail on suspicion of theft of the Mona Lisa, but was later released.

Apollinaire’s first collection of poetry was L’enchanteur pourrissant (1909), but it was Alcools (1913) which established his reputation. These poems, influenced in part by the symbolists, juxtapose the old and the new, using traditional forms and modern imagery.

Also in 1913, Apollinaire published the essay “Les Peintres cubistes” on the cubist painters, a movement which he helped to define. He also coined the term “orphism” to describe a tendency towards absolute abstraction in the paintings of Robert Delaunay and others.

He fought in World War I and in 1916 was seriously wounded in the temple (see photo). While recovering from his wound, he wrote the play Les Mamelles de Tirésias (1917) (the subject of an opera by Francis Poulenc premiered in 1947), which he described as surrealist, making it one of the first works to be so-described. He had earlier coined the word surrealism in the program notes for Jean Cocteau and Erik Satie’s ballet Parade, first performed on 18 May 1917. He also published an artistic manifesto, L’Esprit nouveau et les poètes.

Apollinaire also wrote a well-known pornographic novel, Les Onze Mille Verges (The Eleven Thousand Rods) in 1907. It was officially banned in France until 1970, although various printings of it had circulated widely for many years, and during his lifetime Apollinaire never publicly acknowledged his authorship. Another pornographic novel attributed to him was Les exploits d’un jeune Don Juan (The Exploits of a Young Don Juan), where the hero is 15 years old and ends up fathering three children with various members of his entourage, including his aunt. The book was made into an movie in 1987.

The weakened Apollinaire died of influenza during the Spanish Flu pandemic of 1918. He was interred in the Le Père Lachaise Cemetery, Paris. Shortly after his death, Calligrammes, a collection of his concrete poetry (poetry in which typography and layout adds to the overall effect) was published.

Biography By: This article is licensed under the GNU Free Documentation License and uses material adapted in whole or in part from the Wikipedia article on Guillaume Apollinaire.