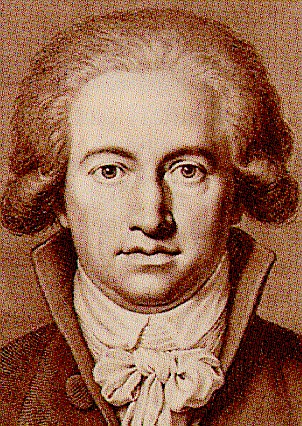 German poet, novelist, playwright, courtier, and natural philosopher, one of the greatest figures in Western literature. In literature Goethe gained early fame with The Sorrows of Young Werther (1774), but his most famous work is the poetic drama in two parts, FAUST. Like the famous character of this poem, Goethe was interested in alchemy. He also made important discoveries in connection with plant and animal life, and evolved a non-Newtonian and unorthodox theory of the character of light and color, which has influenced such abstract painters as Kandinsky and Mondrian.

Noble be man,
Helpful and good!
For that alone
Sets him apart
From every other creature
On earth.
(from The Divine, 1783)

Johann Wolfgang von Goethe was born in Frankfurt am Main, the first child of a lawyer Johann Caspar Goethe, and Katherine Elisabeth Textor, the daughter of the mayor of Frankfurt. Goethe had a comfortable childhood and he was greatly influenced by his mother, who encouraged his literary aspirations. After troubles at school, he received at home an exceptionally wide education. At the age of 16, Goethe began to study law at Leipzig University (1765-68), and he also studied drawing with Adam Oeser. An unhappy love affair inspired Goethe’s first play, The Lover’s Caprice (1767). After a period of illness, Goethe resumed his studies in Strasbourg (1770-71). Some biographers have speculated that Goethe had contracted syphilis – at least his relationships with women were years apart. Goethe practised law in Frankfurt (1771-72) and Wetzlar (1772). He contributed to Frankfurter Gelehrte Anzeigen (1772-73), and in 1774 he published his first novel, self-revelatory DIE LEIDEN DES JUNGEN WERTHERS (The Sorrows of Young Werther), in which he created the prototype of the Romantic hero. The novel, written in the form of a series of letters, depicted the hopeless affair of a young man, Werther, with the beautiful Charlotte. In the end the melancholic Werther romantically commits suicide, after one brief moment of happiness with Charlotte, when she lets him kiss her. Goethe’s model was Charlotte Buff, the fiancée of his friend, whom he had met in Wetzlar in 1772.

Goethe’s youth was emotionally hectic to the point that he sometimes feared for his reason. He was recognized as a leading figure in the Sturm und Drang, which celebrated the energetic Promethean restlessness of spirit as opposed to the ideal of calm rationalism of the Enlightenment. Goethe’s poem ‘Prometheus’, with its insistence that man must believe not in gods but in himself, might be seen as a motto for the whole movement. After a relaxing trip to Switzerland, Goethe made a decisive break with his past. In 1775 he was welcomed by Duke Karl August into the small court of Weimar, where he worked in several governmental offices. Occasionally he read aloud his texts to a selected group of persons – among them the Duke and the two Duchesses. To his disappointment a dog-trainer was also allowed to amuse in the court theatre.

“What you don’t feel, you will not grasp by art,
Unless it wells out of your soul
And with sheer pleasure takes control,
Compelling every listener’s heart.
But sit – and sit, and patch and knead,
Cook a ragout, reheat your hashes,
Blow at the sparks and try to breed
A fire out of piles of ashes!
Children and apes may think it great,
If that should titillate your gum,
But from heart to heart you will never create.
If from your heart it does not come.”
(from Faust I)

In Weimar Goethe did not have much time to publish fiction. He was a council member and member of the war commission, director of roads and services, and managed the financial affairs of the court. Also Goethe’s scientific researches were wide. He discovered the human intermaxilarry bone (1784), and formulated a vertebral theory of the skull. His idea of Urpflanze, the archetypal forms after which all other plants are patterned, has similarities with Plato’s theory of eternal and changeless Forms. In general, Goethe’s metaphysics and organic view of nature showed the influence of Spinoza.

During this period, his great love was Charlotte von Stein, an older married woman, but the relationship remained platonic. Eventually Goethe was released from day-to-day governmental duties to concentrate on writing, although he was still general supervisor for arts and sciences, and director of the court theatres. After Goethe’s emotional dependence on Charlotte ended, he lived happily and unmarried with Christiane Vulpius, who became Goethe’s mistress in 1789. In spite of public pressure, it was not until 1806 when they married.

In 1786-88 Goethe made a journey to Italy. “In Rome I have found myself for the first time,” he wrote. He drew statues and ruins, collected antique and botanical samples, and was shocked by the primitive power of an ancient Greek temple – Renaissance art did not interest him. The journey ended Goethe’s celibacy and inspired his play IPHIGENIE AUF TAURIS, and RÖMISHE ELEGIEN, sensuous poems relating partly to Christiane. The ancient monuments he saw in Italy significantly influenced his growing commitment to a classical view of art. “Three things are to be looked to in a building,” Goethe later wrote in Elective Affinities (1808), “that it stands on the right spot; that it be securely founded; that it be successfully executed.”

In the 1790s Goethe contributed to Friedrich von Schiller’s journal Die Horen, published WILHELM MEISTERS LEHRJAHRE (Wilhelm Meister’s Apprenticeship) in 1795-96, and continued his writings on the ideals of arts and literature in his own journal Propyläen. Wilhelm Meister’s story had preoccupied the author for many years. Wilhelm, disillusioned by love, starts actively to seek out other values, and becomes an actor and playwright. Whereas Werther’s life ended in despair, Meister has a more optimistic spirit. At the end he says: “… I know I have attained a happiness which I have not deserved, and which I would not change with anything in life.” Wim Wenders and Peter Handke made in 1974 a modernized film adaptation of the book, Wrong Movement, in which Meister’s journey has a sad, lonely note. “If only politics and poetry could be united,” he says to his friend Laertes, who answers: “That would be the end of longing and the end of the world.”

During the French Revolution Goethe reported in letters – sometimes written in the middle of cannon fire – to his family his inconveniences, complaining that he was forced to leave his home and dear garden after the French army attacked Prussia. He also saw killings and looted villages. Although Goethe supported freedom and progress, he wanted to preserve the bourgeois or his artistic-individualistic way of life. However, the majority of the German intelligentsia greeted with enthusiasm the goals of the revolution, including Kant, Schiller, and Friedrich Schlegel.

Faust is an alchemical drama from beginning to end, claims C.G. Jung. Goethe worked for most of his life on this masterwork. He started to compose Faust about the age of twenty-three, and finished the second part in 1832, just before his death. The original figure in the Faust legend was Gregorius Faustus (or Gregorius Sabellicus, Faustus Junior, c1480-1510/1), a seeker of forbidden knowledge. His true identity is not known, but he claimed to be an astrologer, expert in magic, and an alchemist. This legend attracted Christopher Marlowe, who offered in his play a psychological study of the battle between good and evil. Marlowe’s drama ends with the protagonist’s damnation. Goethe’s story created a new persona for the Devil – Mephistopheles was a gentleman, who had adopted the manners of a courtier. Faust’s lust for knowledge is limitless and he makes a contract with Mephistopheles: he will die at the moment he declares himself satisfied, if he should exclaim, “Stay, thou art so fair.” When Werther believed that his passion for beauty is fulfilled in afterlife, Faust wants to enjoy his highest moment in this life.

In the first part, published in 1808, Faust seduces and loses Margaret (in German, Margarete, or its diminutive, Gretchen), an innocent girl, who is condemned to death for murdering her illegitimate child by Faust. When she asks Faust, “Do you believe in God?”, he answers:

In the philosophical second part Faust marries Helen of Troy and starts to create an ideal community. Harold Bloom has said in The Western Canon (1994), that the monstrously complex poem is a “scandalous pleasure for the exuberant reader, but it is also a trap, a Maphistophelean abyss in which you will never touch bottom.” Without knowing that his plans have failed, the blind Faust is finally satisfied. However, Mephistopheles loses his victory, when angels take Faust to heaven.

From 1791 to 1817 Goethe was the director of the court theatres. He advised Duke Carl August on mining and Jena University, which for a short time attracted the most prominent figures in German philosophy, including Hegel and Fichte. In 1812 Goethe met the famous composer Ludwig van Beethoven in Teplitz. Beethoven had admired Goethe already in his youth, although he considered Goethe’s attitude toward the nobility too servile. Beethoven composed several music pieces based on the author’s texts, among them Egmont. Franz Schubert’s (1797-1828) first Lieder masterpiece, ‘Gretchen am Spinnrade’, took the words from Faust, but Goethe did not much appreciate Schubert’s musical achievements.

Goethe remained creative during his last period. He edited Kunst and Altertum (1816-32) and Zur Naturwissenschaft (1817-24), wrote his autobiography, Poetry and Truth (1811-1833), and completed the novel WILHELM MEISTERS WANDERJAHRE (1821-9). Interested in visual arts throughout his life, Goethe wrote a large volume on the theory of color, which he considered one of his major achievements. In ZUR FARBENLEHRE (1810) Goethe rejected mathematical approach in the treatment of color, and argued that light, shade and color are associated with the emotional experience – “every color produces a distinct impression on the mind, and thus addresses at once the eye and feelings”.

At the age of 74 Goethe fell in love with the 19-year old Ulrike von Levetzow. He followed her with high hopes from Marienbad to Karlsbad, and then returned disappointed to Weimar. There he wrote The Marienbad elegy, the most personal poem of his later years. Goethe died in Weimar on March 22, 1832. He and Schiller, who died over a quarter of a century earlier, are buried together, in a mausoleum in the ducal cemetery. The Goethe House and Schiller House stand in the town, and the two statues of these literary giants are outside the National Theatre.

1. THOUGHTS ON JESUS CHRIST’S DESCENT INTO HELL. (No Comments »)