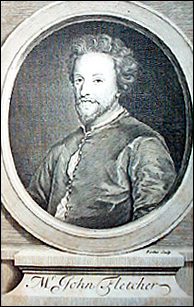 John Fletcher (December 20, 1579 – August, 1625) was a was a Jacobean playwright, born in Rye, Sussex. He went to Cambridge University, but it is not known whether he took a degree, though he had some reputation as a scholar.

After William Shakespeare and Ben Jonson, John Fletcher was arguably the most gifted and influential of the Jacobean dramatists. In succession to Shakespeare, he became the chief dramatist for the leading company of London, the King’s Men. Fletcher was not, as was Shakespeare, a shareholder in the company.

He became one of the eight people regularly under contract as writers for the various London theater companies from 1590 to 1642, along with Thomas Heywood, Thomas Dekker, Philip Massinger, Shakespeare, James Shirley, William Rowley, and Richard Brome.

His mastery is most notable in two dramatic types, tragicomedy and comedy of manners, both of which exerted a pervasive influence on dramatists in the reign of Charles I and during the Restoration.

His father, Richard, was an ambitious and successful cleric who was in turn Dean of Peterborough, bishop of Bristol, Bishop of Worcester, and bishop of London as well as chaplain to the queen. As dean of Peterborough it was Richard Fletcher who at the execution of Mary, Queen of Scots, at Fotheringay “knelt down on the scaffold steps and started to pray out loud and at length, in a prolonged and rhetorical style as though determined to force his way into the pages of history” and who cried out at her death, “So perish all the Queen’s enemies!” John Fletcher was eight at the time. Fletcher was also a cousin of Elizabethan poet Phineas Fletcher.

Beyond the record of his plays the details of his life are scanty. Between 1609 and 1625, it is estimated that Fletcher was involved in the writing of forty-two plays. At least 21 of them have been shown to be collaborations including work of Francis Beaumont, Nathan Field, Shakespeare, Rowley, and Massinger. Only nine of Fletcher’s plays were published in his lifetime.

He wrote The Tamer Tamed, a comedic sequel to The Taming of the Shrew in 1611, just 20 years after Shakespeare wrote the original. It is said Fletcher wrote this play to attract Shakespeare’s attention, and it seems to have worked – the two went on to collaborate on at least three plays.

Biography By: This article is licensed under the GNU Free Documentation License and uses material adapted in whole or in part from the Wikipedia article on John Fletcher.