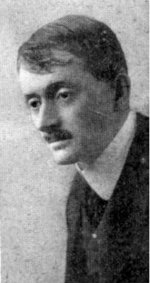 John Edward Masefield (1 June 1878 – 12 May 1967), was a British poet and writer, and Poet Laureate of the United Kingdom from 1930 until his death in 1967. He is remembered as the author of the classic children’s novels The Midnight Folk and The Box of Delights and a great deal of memorable poetry, including “Sea Fever”, from his anthology Saltwater Ballads.

Masefield was born at Ledbury, in Herefordshire, a rural area of England. After an education at the King’s School in Warwickshire and on the school ship HMS Conway, he became a junior officer on an ocean liner. After being taken ill, he was forced to return home in 1897, and his literary career began. His first collection of poetry was Saltwater Ballads, published in 1902. During World War I, though old enough to be exempted from military service, he went to the Western Front as a medical orderly, later publishing his own account of his experiences. He settled in Oxford, inheriting the title of Poet Laureate from a neighbour, Robert Bridges, in 1930. However, it is generally considered that his best work was written before this date.

After his death, he was interred in the Poets’ Corner at Westminster Abbey.

His poem “Sea-Fever” has found its way into popular culture; used whole in a The Incredible Hulk comic book of the 1970s, and also used in the movie Sky Captain and the World of Tomorrow (2004).

Biography By: This article is licensed under the GNU Free Documentation License and uses material adapted in whole or in part from the Wikipedia article on John Masefield.