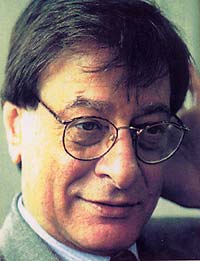 Mahmoud Darwish was a contemporary Palestinian poet, internationally recognized for his poetry, focused on the strong affection for a lost homeland.

Darwish was born in 1941 in the demolished village of Al-Birwah, east of Akko in the British mandated Palestine, now Israel. He was the second child of a family of 5 boys and 3 girls. After the establishment of Israel, he fled to Lebanon and stayed there for a year, before secretly re-entering Israel and settling down in Dair Al-Assad and later Aljdaideh.

He continued his primary education in Dair Al-Assad, while always in fear of being discovered by authorities. Later on, he obtained his secondary eduaction in Kufur Yasif, 2 kilometers north of Jdeideh.

After completing his secondary education, Darwish began publishing poetry and articles for newspapers and magazines such as “Al-Itihad” and “Al-Jadid”, where he later became the editor. He eventually joined the Communist Party in Israel, and began working as a co-editor of “Alfajr”.

He was repeatedly arrested since for his writing and political activities, and in 1970 he left for Moscow. Later, he moved to Cairo and Beirut, where he worked in the research and publishing institutes of the PLO.

Darwish resigned from the PLO following the Oslo Accords.

He continued as an editor for the “Al-Karmel” magazine, and lived in Paris before coming back to Palestine, entering on a visa to see his mother. While in Palestine, he was issued a permit to stay in the country by the Israeli authorities.

Biography By: This article is licensed under the GNU Free Documentation License and uses material adapted in whole or in part from the Wikipedia article on Mahmoud Darwish.