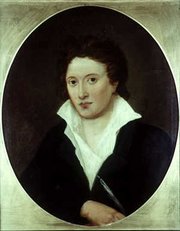 Percy Bysshe Shelley (August 4, 1792 – July 8, 1822) was an English Romantic poet. He is now most famous for poems such as “Ozymandias”, “Ode to the West Wind”, “To a Skylark”, and “The Masque of Anarchy”; for his association with contemporaries John Keats and Lord Byron; and, like them, for his untimely death at a young age.

Percy was a seventeenth generation descendant of Richard Fitzalan, 10th Earl of Arundel and Eleanor of Lancaster through their son John Fitzalan. He was the son of Sir Timothy Shelley (September 7, 1753 – April 24, 1844) and his wife Elizabeth Pilfold following their marriage in October, 1791. His father was son and heir to Sir Bysshe Shelley, 1st Baronet of Castle Goring (June 21, 1731 – January 6, 1815) by his wife Mary Catherine Michell (d. November 7, 1760). His mother was daughter of Charles Pilfold of Effingham. Through his paternal grandmother Percy was great-grandson to Reverend Theobald Michell of Horsham.

He was the eldest of six children. His younger siblings included:

Thus born into an extremely wealthy family of Sussex gentry, Percy became heir to the 2nd baronet of Castle Goring in 1815. He received his early education at home, tutored by Reverend Thomas Edwards of Horsham. In 1802, he entered the Sion House Academy of Brentford. In 1804, Percy entered Eton College. On April 10, 1810 Percy went to the University of Oxford (University College). His first publication was a Gothic novel, Zastrozzi (1810), in which he gave vent to his atheistic worldview through the villain Zastrozzi. In the same year, Shelley together with his sister Elizabeth published Original Poetry by Victor and Cazire. After going up to Oxford, he issued a collection of (ostensibly burlesque but actually subversive) verse, Posthumous Fragments of Margaret Nicholson. A fellow collegian, Thomas Jefferson Hogg, may have been his collaborator.

In 1811, Shelley published a pamphlet, The Necessity of Atheism, which resulted in his expulsion from Oxford on March 25, 1811, along with Hogg. He could have been reinstated, following the intervention of his father, had he recanted his avowed views. Shelley refused, which led to a total break between himself and his father.

Four months after being expelled, 19-yr-old Shelley eloped to Scotland with 16-year-old schoolgirl Harriet Westbrook, daughter of John Westbrook, a coffee-house keeper in London. After their marriage on August 28, 1811, Shelley invited his college friend Hogg to share their household – and also his wife, according to the ideals of free love. When Harriet objected, Shelley quit his first attempt at open marriage and brought Harriet instead to England’s Lake District, intending to write. Distracted by political events, he shortly afterwards visited Ireland to engage in radical pamphleteering. His activities earned him the unfavorable attention of governmental authorities.

Over the next two years, Shelley wrote and published Queen Mab: A Philosophical Poem. The poem shows the influence of English philosopher William Godwin, and much of Godwin’s freethinking radical philosophy is voiced in it. By now unhappy in his nearly three-year-old marriage, Shelley often left his wife and two children alone while he visited Godwin’s home and bookshop in London. It was here that he met and fell in love with Mary, the intelligent and well-educated daughter of Godwin and famed feminist educator and writer Mary Wollstonecraft, who had died at Mary’s birth.

In the fall of 1815, while living close to London with Mary and dodging creditors, Shelley produced the verse allegory Alastor, or The Spirit of Solitude. It attracted little attention at the time, but has come to be recognized as his first major poem.

In the summer of 1816 the Shelleys made a second trip to Switzerland. They were prompted to do so by Mary Shelley’s stepsister Claire Clairmont, who had contracted a liaison with Lord Byron the previous April, just before he entered his self-exile on the continent. Byron had lost interest in Claire, and she used the opportunity of meeting the Shelleys as bait to lure him to Geneva. The Shelleys and Byron rented neighboring houses on the shores of Lake Geneva. Regular conversation with Byron had an invigorating effect on Shelley’s poetry. A boating tour which the two took together inspired Shelley to write the Hymn to Intellectual Beauty, his first significant production since Alastor. A tour of Chamonix in the French Alps inspired “Mont Blanc”, a difficult poem in which Shelley ponders questions of historical inevitability and the relationship between the human mind and external nature. Shelley, in turn, influenced Byron’s poetry. This new influence shows itself in the third part of Childe Harold’s Pilgrimage, which Byron was working on, and in Manfred, which he wrote that fall. At the same time, Mary had been inspired to begin writing Frankenstein. At the end of summer, the Shelleys and Claire returned to England. Claire was pregnant with Byron’s child, a fact that would have an enormous impact on Shelley’s future.

The return to England was marred by tragedy. Fanny Imlay, Mary Godwin’s half-sister and a member of Godwin’s household, killed herself in the late Autumn. In December, 1816 Shelley’s estranged and apparently pregnant wife Harriet drowned herself in the Serpentine River in Hyde Park, London. On December 30, 1816, a few weeks after Harriet’s body was recovered, Shelley and Mary Godwin were married. The marriage was intended, in part, to help secure Shelley’s custody of his children by Harriet, but it was in vain: the children were given over to foster parents by the courts.

The Shelleys took up residence in the village of Marlow, Buckinghamshire where lived Thomas Love Peacock , a friend of Percy. Shelley took part in the literary circle that surrounded Leigh Hunt, and during this period met John Keats. Shelley’s major production this year was Laon and Cythna, a
long narrative poem which attacked religion and featured a pair of incestuous lovers. It was hastily withdrawn after only a few copies were published, then edited and reissued as The Revolt of Islam in 1818. Shelley also wrote two revolutionary political tracts under the nom de plume of “The Hermit of Marlow.”

Travels in the Italian peninsula

Early in 1818, the Shelleys and Claire left England in order to deliver the daughter of Byron and Claire to Byron, who had taken up residence in Venice. Again contact with Byron encouraged the production of Shelley’s poetry. In the latter part of the year he wrote Julian and Maddalo, a lightly disguised rendering of his boat trips and coversations with Byron in Venice, finishing with a visit to a madhouse. He then began the long verse drama Prometheus Unbound, which features talking mountains and a petulant demon who overthrows Zeus. Tragedy struck in 1818 and 1819, when his son Will died of fever in Rome and his infant daughter died during yet another household move.

The Shelleys moved around various Italian cities during these years. Shelley completed Prometheus Unbound in Rome, and spent the summer of 1819 writing a tragedy, The Cenci, in Leghorn. In this year, prompted among other causes by the Peterloo massacre, he wrote his best-known political poems, The Masque of Anarchy, Men of England and The Witch of Atlas, probably his best-remembered works during the 19th century, and the essay The Philosophical View of Reform, his most thorough exposition of his political views.

In 1821, inspired by the death of John Keats, Shelley wrote the elegy Adonais.

In 1822 Shelley arranged for James Henry Leigh Hunt, the British poet and editor who had been one of his chief supporters in England, to come to Italy with his family; he intended that the three of them – himself, Byron and Hunt – would create a journal, to be called The Liberal, with Hunt as editor, which would disseminate their controversial writings and act as a counter-blast to conservative periodicals such as Blackwood’s Magazine and The Quarterly Review.

On July 8, 1822, less than a month before his 30th birthday, Shelley drowned in a sudden storm while sailing back from Pisa and Leghorn to Lerici in his schooner, the Don Juan. He was returning from having set up The Liberal with the newly-arrived Hunt. The name “Don Juan”, a compliment to Byron, was chosen by Edward Trelawny, a member of the Shelley-Byron Pisan circle, but according to Mary Shelley’s testimony, Shelley changed it to “Ariel”. This annoyed Byron, who caused “Don Juan” to be painted on the mainsail, giving offence to the Shelleys, who felt that the boat now looked like a coal barge. The vessel, an open boat designed from a Royal dockyards model, was custom-built in Genoa for Shelley. It did not capsize but sank; Mary Shelley declared in her “Note on Poems of 1822” (1839) that this design had a defect and was never seaworthy.

Shelley’s body was washed ashore and later cremated on the beach near Viareggio. His heart was snatched, unconsumed, from the funeral pyre by Edward Trelawny, and kept by Mary Shelley until her dying day, while his ashes were interred in the Protestant Cemetery, Rome.

Three children survived him: Ianthe and Charles, his daughter and son by Harriet; and Percy Florence, his son by Mary. Charles died of tuberculosis in 1826. Percy Florence, who eventually inherited the baronetcy in 1844, died without children. The only lineal descendants of the poet are therefore the children of Ianthe.

Ianthe Eliza Shelley was married in 1837 to Edward Jeffries Esdaile. The marriage resulted in the birth of two sons and a daughter. Ianthe died in 1876.

Shelley’s mainstream following did not develop until long after his passing; this contrasted with Lord Byron, who was popular amongst the upper classes during his lifetime, despite his radical views. For decades after his death Shelley was mainly appreciately by the major Victorian poets, such as Tennyson and Browning, by the pre-Raphaelites, and by socialists and the labour movement – Karl Marx was among his admirers. Only towards the end of the 19th century did Shelley’s work, or rather his more innocuous work, become respectable – popularised by, among others, Henry Salt, whose acclaimed biography Percy Bysshe Shelley: Poet and Pioneer was first published in 1896.

Biography By: This article is licensed under the GNU Free Documentation License and uses material adapted in whole or in part from the Wikipedia article on Percy Bysshe Shelley.