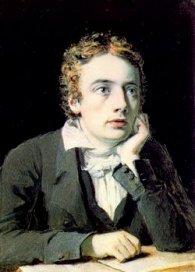 John Keats was born on 31 October 1795 (probably), first child of Thomas Keats and Frances Jennings Keats, who had apparently eloped. Everything was pretty ordinary for all concerned for a while–the Keatses had three more sons (George and Thomas, plus Edward who died as a baby) and one daughter, Frances, by 1803. That was also the year when John went away to school at Enfield. In 1804, John’s father was killed in a fall from a horse. Just over two months later, for mysterious reasons, Frances remarried, to a London bank clerk named William Rawlings. Frances quickly decided she’d made some sort of terrible error and left, taking nothing with her since the laws of the time decreed that all her property and even her children belonged to her husband. Frances’ mother, Alice, swept in and took custody of the children, but she could do nothing about the Swan and Hoop, which Rawlings sold immediately before disappearing. It was around this time that John became prone to fistfights, which he rarely lost even though he was small for his age.

Frances reappeared suddenly in 1809, ill and depressed from many years of depending on the kindness of strangers. John was overjoyed to see her and took care of her devotedly, but it was soon obvious that she had consumption. She died in 1810, a year or so after her brother died of the same disease. John was crushed, and turned from fighting to studying. A year later, one of his financial guardians, a man named Abbey, sat him down and asked John what he’d like to do for a living. John had already considered the question, and replied that he’d like to be a surgeon. So he was duly apprenticed to a surgeon named Hammond who lived in the neighborhood.

It was in 1813 that John first started reading lyric poetry, most notably works by Sir Edmund Spenser like “The Faerie Queen.” It was also around this time that John began to really rebel against Hammond. The following year, Grandmother Jennings died, and the family was split up, it being improper at that time for younger sisters to live with older brothers without a parental type around. Frances was sent to live with the kids’ other financial guardian and the two boys went to work. John just kept to himself and wrote really sad poems. These poems still weren’t very good, and he kept right on with learning to be a surgeon (in fact, he was doing so well, he’d jumped ahead of the curriculum) but over the next couple of years, poetry gradually became the overriding ambition of his life and medicine was left in the dust.

One of John’s sonnets, called “To Solitude, ” was printed in 1816, in the liberal newspaper, The Examiner. This sonnet was good, but it wasn’t until a little later in the year that he wrote “On First Looking Into Chapman’s Homer,” which proved that he was the man to watch. His first volume of poetry appeared on 3 March 1817, and it didn’t sell very well at all. John was depressed, but kept writing. Shelley had challenged him to an epic poetry writing contest over the summer, and for that contest, John wrote Endymion, though he didn’t finish it within the time limit, so I guess Shelley won. But John was the sought-after young poet in London, and he lived in a whirl of parties and dances, even though he didn’t much like crowds.

In June of 1818, John apparently became convinced that he would have only three more years to live. He’d already written many of his most famous poems, but he was still convinced that he hadn’t yet done enough to leave his mark on the literary world. His brother George had announced plans to emigrate to Illinois with his new wife, and his brother Tom had just started showing signs of consumption and needed John to look after him. And to top it all off, John had just fallen madly in love with a young woman named Frances Brawne. All of this overwhelmed and depressed him. He tried to lose himself in his latest poem, Hyperion, but that’s hard to do when you’re spending most of your time in a sickroom.

Tom died in December of 1818. Though John should have received £500 from Tom’s estate, Abbey (the guardian) decreed that he couldn’t have it until his sister Frances turned 21. It wasn’t until a year or so after John’s death that anyone realized that Abbey had misappropriated nearly £1000 from Alice Jennings’ estate. To make matters worse, brother George had gone broke and was begging John to send him whatever he could scavenge from the family funds. Desparate, John convinced his publishers to issue another volume of his poetry, but this was not a stunning success. Dead broke, he still allowed George to have the remnants of the family estate. John was rapidly becoming dependant on the help of his friends, people like Leigh Hunt (who’d gotten married and settled down some) and Charles Brown. John was also developing consumption, coughing up blood in February of 1820.

It was around this time that, without consulting John, Charles began arrangements for sending John to Italy. John didn’t want to be so far away from his ladylove, but he felt incapable of arguing. He left in September of1820, accompanied by Joseph Severn, an up and coming portrait artist. Once in Rome, the two men moved into lodgings across the piazza from an English doctor named Clark. John was not allowed to write poetry and only given the dullest books to read, as emotional excitement was considered very bad for consumptive patients. John was definitely in a state; he stopped opening letters, even from his beloved Frances, after a month or so. In December, he tried to commit suicide by taking laudanum, but Severn stopped him. Later, delirious from the disease and the starvation diet Clark prescribed, John would rant at Severn for stopping him and even went so far as to accuse his friends of having poisoned him back in London.