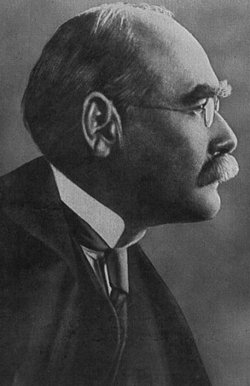 Joseph Rudyard Kipling (December 30, 1865 – January 18, 1936) was a British author and poet, born in India. He is best known for the children’s story The Jungle Book (1894), the Indian spy novel Kim (1901), the poems Gunga Din (1892) and If— (1895), and his many short stories. He was also an outspoken defender of Western imperialism, coined the phrase The White Man’s Burden and embodied what that implied in the hymnlike strophes of Recessional: a Victorian Ode (1897) with its refrain “Lest we forget— lest we forget.”

The height of his popularity was the first decade of the 20th century; in 1907 he was awarded the Nobel Prize for Literature, and in 1934 he shared the Gothenburg Prize for Poetry with William Butler Yeats. In his own lifetime he was primarily considered a poet, and was even offered a knighthood and the post of British Poet Laureate — though he turned them both down.

Kipling was born in Bombay, India. His father was John Lockwood Kipling, a teacher at the local Jeejeebhoy School of Art, and his mother was Alice Macdonald. They are said to have met at Rudyard Lake in Staffordshire, England, hence Kipling’s name. His mother’s sister was married to the artist Edward Burne-Jones, and young Kipling and his sister spent much time with the Burne-Joneses in England from the ages of six to twelve, while his parents remained in India. Kipling was a cousin of the three-times Prime Minister Stanley Baldwin.

After a spell at a boarding school, the United Services College, Kipling returned to India, to Lahore (in modern-day Pakistan) where his parents were then working, in 1881. He began working as a newspaper editor for a local edition and continued tentative steps into the world of poetry; his first professional sales were in 1883.

By the mid-1880s he was travelling around the subcontinent as a correspondent for the “Allahabad Pioneer”. His fiction sales also began to bloom, and he published six short books of short stories in 1888. One short story dating from this time is “The Man Who Would Be a King”, later made famous as a slightly differently named movie featuring Sean Connery and Michael Caine.

The next year Kipling began a long journey back to England, going through Burma, China, Japan, and California before crossing the United States and the Atlantic Ocean and settling in London. From then on his fame grew rapidly, and he positioned himself as the literary voice most closely associated with the imperialist tempo of the time in the United Kingdom (and, indeed, the rest of the Western world and Japan). His first novel, The Light that Failed, was published in 1890. The most famous of his poems of this time is probably “The Ballad of East and West” (which begins “Oh, East is East, and West is West, and never the twain shall meet”).

In 1892 he married Caroline Balestier; her brother, an American writer, had been Kipling’s friend but had died of typhoid fever the previous year. While on honeymoon Kipling’s bank failed and cashing in their travel tickets only let the couple return as far as Vermont (where most of the Balestier family lived). Rudyard and his new bride lived in the United States for the next four years. During this time he turned his hand to writing for children, and he published the works for which he is most remembered today — The Jungle Book and its sequel The Second Jungle Book — in 1894 and 1895.

After a quarrel with his in-laws, he and his wife returned to England, and in 1897 he published Captains Courageous. The next year he began travelling to southern Africa for winter vacations almost every year. There he met and befriended Cecil Rhodes, and began collecting material for another of his children’s classics, Just So Stories for Little Children. That work was published in 1902, and another of his enduring works, Kim, first saw the light of day the previous year.

Kipling’s poetry of the time included Gunga Din (1892) and The White Man’s Burden (1899); in the non-fiction realm he also became involved in the debate over the British response to the rise in German naval power, publishing a series of articles collectively entitled A Fleet in Being.

The first decade of the 20th century saw Kipling at the height of his popularity. In 1907 he was awarded the Nobel Prize for Literature; bookending this achievement was the publication of two connected poetry and story collections, 1906’s Puck of Pook’s Hill and 1910’s Rewards and Fairies. The latter contained the poem If—. In a 1995 BBC opinion poll, it was voted Britain’s favourite poem. This exhortation to self-control and stoicism is arguably Kipling’s single most famous poem.

Biography By: This article is licensed under the GNU Free Documentation License and uses material adapted in whole or in part from the Wikipedia article on Rudyard Kipling.