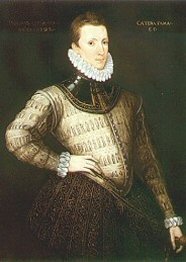 Sir Philip Sidney (November 30, 1554 – October 17, 1586) became one of the Elizabethan Age’s most prominent figures. Famous in his day in England as a poet, courtier and soldier, he remains known as a writer of sonnets.

Born at Penshurst, Kent, he was the eldest son of Sir Henry Sidney and Lady Mary Dudley. His mother was the daughter of John Dudley, Duke of Northumberland, and the sister of Robert Dudley, Earl of Leicester.

Philip was educated at Shrewsbury School and Christ Church College, Oxford. He was much travelled and highly learned. He was knighted in 1582, and three years later became governor of Flushing in the Netherlands. He married Frances, daughter of Sir Francis Walsingham.

Sir Philip’s life ended prematurely when he suffered a fatal wound at the Battle of Zutphen. His great work, Arcadia, was only published after his death.

The most famous story about Sir Philip (intended as an illustration of his noble character) is that, while dying, he gave his water-bottle to another wounded soldier, saying, “Thy need is greater than mine”. An early biography of Sidney was written by his friend and schoolfellow, Fulke Greville.

Biography By: This article is licensed under the GNU Free Documentation License and uses material adapted in whole or in part from the Wikipedia article on Sir Philip Sidney.