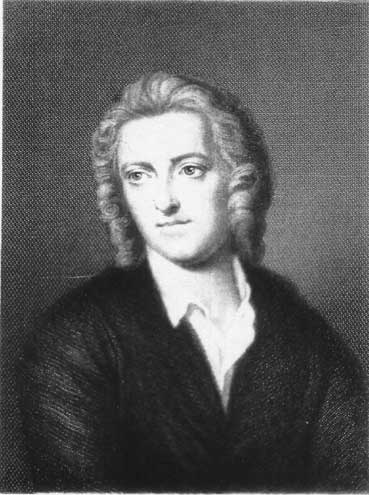 Thomas Gray was born in London, and lived with his mother after she left his abusive father. He was educated at Eton College, and became a Fellow first of Peterhouse and later of Pembroke College, Cambridge. While a student, he met Horace Walpole, whom he accompanied on the Grand Tour.

Gray spent most of his life as a scholar in Cambridge, and only later in his life did he begin travelling again. Although he was one of the least productive poets (his collected works published during his lifetime amount to less than 1,000 lines), he was, besides William Collins (1721 – 1759), the predominant poetic figure of the middle decades of the 18th century. In 1757, he was offered the post of Poet Laureate, which he refused. In 1768 he succeeded Lawrence Brockett as Regis Professor of History at Cambridge, a sinecure.

Gray’s “Elegy Written in a Country Church-yard (1751), believed to have been written in the churchyard of Stoke Poges, Buckinghamshire, has become a lasting contribution to the English heritage. It is still one of the most popular and most frequently quoted poems in the English language; before the battle of the Plains of Abraham, British General James Wolfe is said to have recited it to his officers, adding, “Gentlemen, I would rather have written that poem than take Quebec tomorrow.”

Gray combined traditional forms and poetic diction with new topics and modes of expression and may thus be considered as a classically focussed precursor of the romantic revival.

The Elegy was recognized immediately for its beauty and skill, and the Churchyard Poets are so named because they wrote in the shadow of Gray’s great poem. Gray also wrote light verse, such as Lines Written upon the Death of a Favorite Cat, where he offers up the moral that his cat (who died trying to fish goldfish out of a bowl) had to learn that not “all that glisters [is] gold.”

Gray’s personal life was tinged with scandal. While contemporaries knew of his sexual preference, there were generally no objections raised about it. However, twice Gray had trouble for dalliances with students. In one case, the student was reported to have been molested. In another, the student’s break-up with Gray caused a scene.

Biography By: This article is licensed under the GNU Free Documentation License and uses material adapted in whole or in part from the Wikipedia article on Thomas Gray.