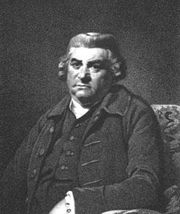 Warton was born in Basingstoke, Hampshire, England, the son of poet Thomas Warton, the Elder (b. circa 1688, d. 1745), and younger brother of Joseph Warton. As a youngster, Warton demonstrated a strong predilection toward writing poetry, a skill he would continue to develop all of his life.

His early education was given him by his father. At sixteen years of age he enrolled at Winchester College, later moving to Trinity College, Oxford. He graduated from Oxford in 1747, where he subsequently became a Fellow. Warton was selected as poet Laureate of Oxford in 1747 and again in 1748. His duty in this post was write a poem about a selected patroness of the University, which would be read to her on a specially appointed day.

Among other important contributions, Warton, along with his brother, was among the first to argue that Sir Thopas, by Geoffrey Chaucer, was a parody. Warton contributed to the general project of the ballad revival. He was a general supporter of the poetry of Thomas Gray—a fact that Johnson satirized in his parody “Hermit hoar, in solemn cell.”

In 1749, Warton penned The Triumph of Isis, a poem praising of Oxford and the many students who had received their education there. Published anonymously, The Triumph of Isis rebutted William Mason’s Isis, an Elegy published the previous year, which was anything but flattering to Oxford.

Soon afterward, Warton wrote Newmarket, a Satire, followed by a collection of verses.

Warton’s first major academic work was Observations on the Faerie Queene of Spenser, published in (1754). He is, however, best known for the three-volume The History of English Poetry (1774-81), which covered the poetry of the 11th through the 16th centuries. Although the work was criticized for its many inaccuracies, it is nonetheless considered a highly important and influential historical tome.

As a poet, Warton was more inclined toward light and humorous verse, odes and sonnets. His sonnets helped to revive the form, which had fallen out of fashion. He is remembered for his interest in primitivism, which was an important stage toward romanticism.

Biography By: This article is licensed under the GNU Free Documentation License and uses material adapted in whole or in part from the Wikipedia article on Thomas Warton.