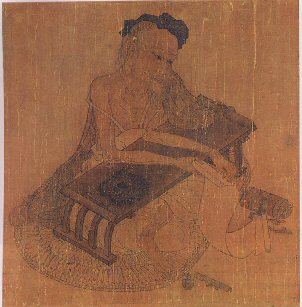 From a high family, he passed the civil service entrance examination in 721 and had a successful civil service career, rising to become Right Assistant Director of State Affairs in 759. During the An Lushan Rebellion he avoided actively serving the insurgents during the capital’s occupation by pretending to be deaf.

He spent ten years studying with the Chan master Daoguang. After his wife’s death in 730, he did not remarry and established a monastery on part of his estate.

He is best known for his quatrains depicting quiet scenes of water and mist, with few details and little human presence. The Indiana Companion comments that he affirms the world’s beauty, while questioning its ultimate reality. It also draws a comparison between the deceptive simplicity of his works and the Chan path to enlightenment, which is built on careful preparation but is achieved without conscious effort.

None of his original paintings survive, but copies of works attributed to him are also landscapes with similar qualities. He influenced what became known as the Southern school of Chinese landscape art, which was characterised by strong brushstrokes contrasted with light ink washes.

Biography By: This article is licensed under the GNU Free Documentation License and uses material adapted in whole or in part from the Wikipedia article on Wang Wei.