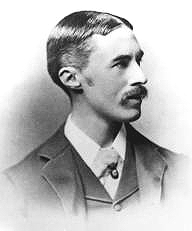 Alfred Edward Housman (March 26, 1859 – April 30, 1936) was an English poet and classical scholar, now best known for his cycle of poems A Shropshire Lad. He was born in Fockbury, Worcestershire, the eldest of seven children of a country solicitor. His brother Laurence Housman and sister Clemence Housman also became writers.

Housman was educated first in King Edward’s School, then in Bromsgrove School where he acquired a strong academic grounding and won prizes for his poetry. In 1877 he won an open scholarship to St John’s College, Oxford, where he studied classics. He was a brilliant student, gaining first class honours in classical moderations, but a withdrawn person whose only friends were his roommates Moses Jackson and A. W. Pollard. Housman fell in love with the handsome, athletic Jackson who, being heterosexual, rejected him, though the two remained best friends. This experience, reflected in some of his poems, may be an explanation of Housman’s unexpected failure in his final exams (the “Greats”) in 1881. Housman took this failure very seriously but managed to take a pass degree the next year, after a brief period of teaching in Bromsgrove School.

After graduating, Jackson got a job as a clerk in the Patent Office in London and arranged a job there for Housman as well. They shared an apartment with Jackson’s brother Adalbert until 1885 when Housman moved in to lodgings of his own. Moses Jackson married and moved to India in 1887 and Adalbert Jackson died in 1892, leaving Housman a profoundly lonely man. He continued pursuing classical studies on his own and published scholarly articles on such authors as Horace, Propertius, Ovid, Aeschylus, Euripides and Sophocles. He gradually acquired such a high reputation that in 1892 he was offered the professorship of Latin in University College London, which he accepted.

Although Housman’s sphere of responsibilities as professor included both Latin and Greek, he put most of his energy in the study of Latin classics. His reputation in this field grew steadily, and in 1911 he took the Kennedy Professorship of Latin at Trinity College, Cambridge, where he remained for the rest of his life. In 1903-1930, he published his critical edition of Manilius’s Astronomicon in five volumes. He also edited works of Juvenal (1905) and Lucan (1926). Many colleagues were afraid of his scathing critical attacks on those whom he found guilty of unscholarly sloppiness. To his students he appeared as a severe, reticent, remote authority. The only pleasures he allowed himself in his spare time were those of gastronomy which he also practised on frequent visits to France and Italy.

Housman always found his true vocation in classical studies and treated poetry as a secondary activity. He never spoke about his poetry in public until 1933 when he gave a lecture on The Name and Nature of Poetry in which he argued that poetry should appeal to emotions rather than intellect. He died two years later in Cambridge. His ashes are buried near St Laurence’s Church, Ludlow, Shropshire.

During his years in London, A E Housman completed his cycle of 63 poems, A Shropshire Lad. After several publishers had turned it down, he published it at his own expense in 1896, much to the surprise of his colleagues and students. At first the book sold slowly, but during the second Boer War, Housman’s nostalgic depiction of brave English soldiers stroke a chord with English readers and his poems became a lasting success. Later, World War I had a further increasing effect on their popularity. Several composers, Arthur Somervell first, found inspiration in the seeming folksong-like simplicity of the poems. The most famous musical settings are by George Butterworth and Ralph Vaughan Williams, with others by Ivor Gurney, John Ireland and Ernest John Moeran.

Housman was surprised by the success of A Shropshire Lad because it, like all his poetry, is imbued with a deep pessimism and an obsession with all-pervasive death, with no place for the consolations of religion. Set in a half-imaginative pastoral Shropshire, “the land of lost content” (in fact Housman wrote most of the poems before ever visiting the place), the poems explore themes of fleetingness of love and decay of youth in a spare, uncomplicated style which many critics of the time found out of date compared with the exuberance of some Romantic poets. Housman himself acknowledged the influence of the songs of William Shakespeare, the Scottish Border Ballads and Heinrich Heine, but specifically denied any influence of Greek and Latin classics in his poetry.

In the early 1920s, when Moses Jackson was dying in Canada, Housman wanted to assemble his best unpublished poems together so that Jackson could read them before his death. These later poems, most of them written before 1910, show a greater variety of subject and form than those in A Shropshire Lad but also a certain lack of the kind of consistency found in the earlier poems. He published them as his Last Poems (1922) because he thought that his poetic inspiration was running out and that he would not publish any more poems in his lifetime. This proved true.

Housman’s brother Laurence edited his posthumous poems which appeared in More Poems (1936) and Complete Poems (1939). In these poems, Housman appears more candid about his homosexuality and atheism than in his lifetime, though the essay De Amicitia, published by Laurence Housman in 1967, is even more revealing. Housman also wrote a parodic Fragment of a Greek Tragedy, in English, and humorous poems published posthumously under the title Unkind to Unicorns.

Housman’s most familiar poem is surely “When I was one-and-twenty,” number XIII from A Shropshire Lad. The Oxford Dictionary of Quotations includes no fewer than fourteen of its sixteen lines.

Biography By: This article is licensed under the GNU Free Documentation License and uses material adapted in whole or in part from the Wikipedia article on A.E. Housman.

From A Shropshire Lad

To An Athlete Dying Young (No Comments »)