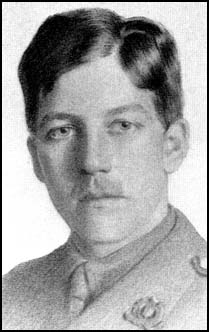 Charles Hamilton Sorley (May 19, 1895 – October 13, 1915) was a British poet of World War I. Born in Aberdeen, Scotland, he was educated, like Siegfried Sassoon, at Marlborough College (1908-1913). At Marlborough College Sorley’s favourite pursuit was cross-country running in the rain, a theme evident in many of his pre-war poems, including Rain and The Song of the Ungirt Runners. Before taking up a scholarship to study at University College, Oxford Sorley studied in Schwerin, Germany, up to the outbreak of World War I.

After a brief detention in Trier, Sorley returned to England and volunteered for military service, joining the Suffolk Regiment. He arrived at the Western Front in France as a Lieutenant in May 1915, and quickly rose to the rank of Captain at the age of only twenty. Sorley was killed in action, shot in the head by a sniper, at the Battle of Loos on October 13, 1915.

In his work, Sorley may be seen as a forerunner of Sassoon and Owen, and his unsentimental style stands in direct contrast to that of Rupert Brooke. Sorley’s last poem was recovered from his kit after his death, and includes some of his most famous lines:

When you see millions of the mouthless dead

Across your dreams in pale battalions go…

The writer Robert Goddard took the title of his novel In Pale Battalions from these lines.

Sorley’s sole work was published posthumously in January 1916, and immediately became a critical success, with six editions printed that year. Sorley is regarded by some, including the Poet Laureate John Masefield (1878-1967), as the greatest loss of all the poets killed during the war. Despite the horrors of World War I, Sorley felt it had freed his spirit.

Biography By: This article is licensed under the GNU Free Documentation License and uses material adapted in whole or in part from the Wikipedia article on Charles Sorley.