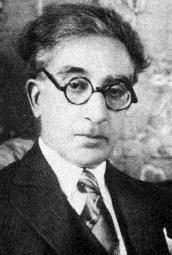 Constantine P. Cavafy, also known as Konstantin or Konstantinos Petrou Kavafis, or Kavaphes (April 29, 1863 – April 29, 1933) was a Greek poet who is among the 20th century’s most important literary figures, though he is relatively little known in the English speaking world; he also worked as a journalist and civil servant.

Cavafy was born in Alexandria, Egypt. His father was a wealthy importer-exporter, however, when his father died in 1870, Cavafy and his family had to move to Liverpool, UK, though he moved back to Alexandria in 1882.

The outbreak of riots there in 1885 meant the family had to move again, this time to Constantinople. In 1885 Cavafy moved back to Alexandria, where he lived for the rest of his life. He originally worked as a journalist, but then worked for the Egyptian Ministry of Public Works for thirty years. From 1891-1904 he published his poetry in broadsheet form for his close friends, receiving little acclaim during his lifetime. He died in 1933.

Since his death, Cavafy’s reputation has grown, and he is now considered to be one of the finest modern Greek poets. One of Cavafy’s poems has been quoted in the recent novel Music, In a Foreign Language by Andrew Crumey.

Cavafy was instrumental to the revival and recognition of Greek poetry both at home and abroad. His poems were typically concise but intimate portraits of real or literary individuals and societies that played a role in Greek culture. Uncertainty about the future, sensual pleasures, the moral character and psychology of individuals, homosexuality and nostalgia are some of the defining themes. A recluse, he was virtually unknown until late in his life. Besides his subjects, unconventional for the time, his poems also exhibit a skilled and versatile craftsmanship, which is almost completely lost in translation. His poetry is now taught at schools in Greece.

Biography By: This article is licensed under the GNU Free Documentation License and uses material adapted in whole or in part from the Wikipedia article on Constantine P. Cavafy.