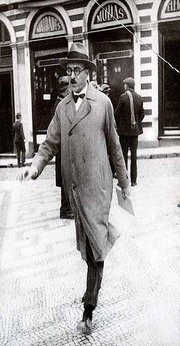 Fernando António Nogueira Pessoa (13 June 1888 – 30 November 1935) has been called by some the greatest modern author in the history of Portugal.

Pessoa was born in Lisbon. His father died of tuberculosis when Fernando was still young. His mother then married the Portuguese consul in Durban, South Africa, and the family moved there. Pessoa was taught in English in both Durban and Cape Town, and his first works were written in English, influenced by William Shakespeare and John Milton. Pessoa moved back to Lisbon when he was 17 in order to study at university, but a student strike put an end to his studies and he went to work for a businessman, writing his correspondence.

By day, Pessoa made a living as a translator. By night he wrote poetry — but not just his poetry. He wrote poetry in the voice, style and manner of many fictional poets, referred to as heteronyms. He published under several of these names, and even published, or at least composed, criticism by certain heteronyms against other of his heteronyms. Each was not just a nom de plume, but rather a wholly formed individual with a prescribed birthdate and place, appearance, temperment, literary ideas, and philosophy. Some of the heteronyms hated others. If not for the work, Pessoa might only be considered an astoundingly strange madman. But the work of the individual heteronyms each represent interesting and distinct avenues of thought, technique and artistry. Any one set of poems would at least be a significant minor achievement and have earned Pessoa a place among writers. But as a body, the achievement has earned Pessoa an ever rising position of respect and interest.

He began translating, and writing for the magazine Orpheu. His first book of poems, Antinous, was published in English in 1918. His first work in Portuguese the long patriotic poem, Mensagem (Message), did not appear until 1933.

Much of his work was published in literary magazines, especially his own, Athena. The work which many consider his masterwork, Livro do Desassossego (The Book of Disquiet) was not published until 1982, almost 50 years after his death. It is what Pessoa called a “factless autobiography”, and was published by the semi-heteronym Bernardo Soares, although sometimes under the name Vincente Gomes. It is a collection of manuscripts, supposedly written by Soares, describing the “author”‘s life. These manuscripts were left in hundreds of separate sections without a designated order. Each edition of the book that has been published begins at a different point and proceeds in a different order according to the publishers choice of how to organize the separate passages. This can be seen as the intent to make explicit the role of the publisher in the formation of a piece of literature, as not all the editions describe how that version has been arrived at, hence one could assume that that was the authorially intended order until seeing a different publishers version of the book. It is the extention of the idea of the author from the ideology of the individual producer to a culturally produced object.

There are four main heteronyms, Ricardo Reis, Álvaro de Campos, Alberto Caeiro, and Fernando Pessoa. The first three heteronyms atest to there being no such man named Fernando Pessoa. The heteronym ‘Fernando Pessoa’ encourages this notion in his own writing. Ricardo Reis and Álvaro de Campos both describe Alberto Caeiro as their unsurpassable master. Ricardo Reis wrote the introduction to the posthumously collected poems of Alberto Caeiro. Literary critics have sometimes taken the attitude of assimilating the various qualities of these heteronyms to formulate the notion of a singular ideological intent that could be attributed to the author. On the other hand there is the idea of allowing a desired plurality within the ideological institution of the author to exist. This is particularly relevant today, where the notion of the author in both literature and art is being disolved. A parallel can be made to Jorge Luis Borges’ story “Borges and I” and Michel Foucault’s text “What is the Authour”.

One can also pair Pessoa with many other writers of his time, which were attemting to have floating subjects which reflected an ambiguous author. James Joyce in Ulysses is working with this idea of the metaconscious author with fragmented reflections of himself laid out in his writing. T.S. Eliot in the Wasteland exhibits the same notion of the shifting or floating voice avoiding the stabilization of the narrator.

The novelty of Pessoa’s project has been credited by some for his dramatic rise in popularity in the past twenty years. But others, especially Pen Award Winning translator Richard Zenith, believe that Pessoa’s skill and artistry will indeed stand the test of time.

1998 Portuguese Nobel Prize winner José Saramago wrote a tribute to Fernando Pessoa in his 1984 book The Year of the Death of Ricardo Reis, in which he tries to explain what happened to Ricardo Reis (one of Pessoa’s many heteronyms) after Pessoa died, in 1935. The story takes place in Lisbon, to where Reis returned after the death of his “friend” and uses characters who first appeared in Reis poems.

Biography By: This article is licensed under the GNU Free Documentation License and uses material adapted in whole or in part from the Wikipedia article on Fernando Pessoa.