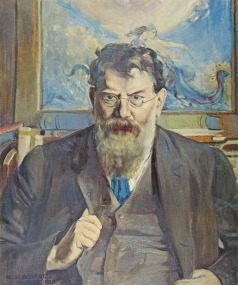 George William Russell went by the psuedonym AE. He was an Irish author who was born in Lurgan and educated in Dublin. An active member of the Irish nationalist movement, he edited the Irish Homestead (1904-23) and the Irish Statesman (1923-30). He worked with Sir Horace Plunkett for Irish agricultural improvement, and he was also a talented amateur painter and a renowned conversationalist. Russell was one of the major writers in the Irish literary renaissance. His poems and plays are noted for their mystical tone, their delicate melodious style, and their view of humanity’s spiritual nature. Among his works are Homeward: Songs by the Way (1894), The Candle of Vision (1918), and Selected Poems (1935).

Met fellow poet and mysticist W. B. Yeats in Dublin 1881 when they both studied at the Metropolitan School of Art.