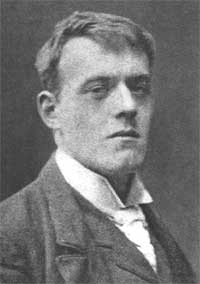 Joseph Hilaire Pierre René Belloc (July 27, 1870 – July 16, 1953) was one of the most prolific writers in England during the early twentieth century. His style and personality led to the nickname, “Old Thunder”.

His best travel writing and his works for children have secured a permanent following. The Path to Rome (1902), an account of a walking trip he took from central France to Rome, has remained continuously in print.

Some of his many other works have been reissued, by Ignatius Press of California. One of Belloc’s most famous statements was “Europe is the faith and the faith is Europe”; this sums up his strongly-held, orthodox Catholic views, and the cultural conclusions he drew from them, which were expressed at length in many of his works from the period 1920-1940. These are still cited as exemplary of Catholic apologetics. They have also been criticised, for instance by comparison with the work of Christopher Dawson during the same period.

His “cautionary tales”, humorous poems with a moral, such as Matilda, who told lies and was burnt to death, are the most widely known of his writings. Matilda’s tale was adapted into the play “Matilda Liar!” by Debbie Isitt.

He was born in La Celle-Saint-Cloud France (next to Versailles and near Paris) to a French father and English mother, and grew up in England. He knew at an early age Henry Edward Cardinal Manning, who was responsible for the conversion of his mother. Manning’s involvement in the 1889 London Dock Strike made a major impression on Belloc and his view of politics, according to biographer Robert Speaight. Belloc described this retrospectively in The Cruise of the Nona (1925); he became a trenchant critic both of unbridled capitalism, and of many aspects of socialism.

Belloc served his term of military service, as a French citizen, with an artillery regiment near Toul in 1891. He was powerfully built, with great stamina, and walked extensively in Britain and Europe. While courting his future wife Elodie, whom he first met in 1890, the impecunious Belloc walked a good part of the way from the midwest of the United States to her home in northern California, paying for lodging at remote farm houses and ranches by sketching the owners and reciting poetry. He was later a well known yachtsman.

An 1895 graduate of Balliol College, Oxford, Belloc went into politics after he became a naturalised British citizen. At the Oxford Union he held his own in debates with F. E. Smith and John Buchan, the latter a friend. A great disappointment in his life was his failure to gain a fellowship at All Souls College in Oxford.

He was a Liberal Party Member of Parliament from 1906 to 1910, but swiftly became disillusioned with party politics. He then wrote on myriad subjects, from warfare to poetry and many topics current in his day. He was closely associated with G. K. Chesterton; George Bernard Shaw coined the term “Chesterbelloc” for their partnership.

His only period of steady employment was as editor of Land and Water, from 1914 to 1920. Otherwise he lived by his pen, and often felt short of money. While he certainly had brilliance and achievement, he was a poor listener. His larger-than-life personality, and strongly held views, were more acceptable in small doses. His setbacks in the academic and political worlds lent asperity to his writing.

As an essayist he was one of a small, admired and dominant group (with Chesterton, E. V. Lucas and Robert Lynd) of popular writers. In the large he sometimes came across as rather too opinionated, and the dedicated Catholic controversialist. He was at his most effective in the 1920s, on the attack against H. G. Wells’s Outline of History; but tended to come off worse in crossing swords with academics.

He suffered a stroke in 1941, and lived the rest of his life very quietly.

Two of his best known works are The Servile State (1912) and Europe and Faith (1920). He wrote a long series of contentious historical biographies, typical being those of Oliver Cromwell, James II, and Napoleon.

He was an ardent proponent of orthodox Catholicism and a critic of many elements of the modern world. In The Servile State, and in many other works, Belloc criticized the modern economic order, advocating instead a theory known as distributism in opposition to both capitalism and socialism.

He wrote one of the alternative history stories/essays for the 1932 collection If It Had Happened Otherwise edited by Sir John Squire.

Biography By: This article is licensed under the GNU Free Documentation License and uses material adapted in whole or in part from the Wikipedia article on Hilaire Belloc.

The Bad Child's Book of Beasts