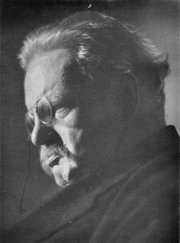 Born in Campden Hill, Kensington, London, Chesterton was educated at St. Paul’s School, and later went to the Slade School of Art in order to become an illustrator. In 1900, Chesterton was asked to write a few magazine articles on art criticism, which sparked his interest in writing. He went on to become one of the most prolific writers of all time. Chesterton’s writings displayed a wit and sense of humor that is unusual even today, while often time making extremely serious comments on the world, government, politics, economics, philosophy, theology, or a hundred other topics.

Chesterton wrote around 80 books, several hundred poems, 200 short stories, 4000 essays and a few plays. He was a columnist for the Daily News, Illustrated London News, and his own paper, G.K’s Weekly. In the United States, his writings on distributism were popularized through The American Review, published by Seward Collins in New York. He was a literary and social critic, historian, playwright, novelist, Catholic Christian theologian and apologist, debater, and mystery writer. His most well-known character is the priest-detective Father Brown, who appeared only in short stories, while The Man Who Was Thursday is arguably his best-known novel. He converted to Catholicism in 1922 and themes and symbolism of Christianity are evident in much of his writing.

The British writer Hilaire Belloc is often associated with his friend Chesterton. Although very different men, they had in common their Catholic faith and a critical attitude to both capitalism and socialism. Both are figures likely to outlast many of their more celebrated literary ontemporaries.

Chesterton was a large man, standing 6 feet 4 inches and weighing around 300 pounds. Chesterton had a unique look, usually wearing a cape and a crumpled hat, with a swordstick in hand, and usually a cigar hanging out of his mouth. Chesterton rarely remembered where he was supposed to be going and would even miss the train that was supposed to take him there. It was not uncommon for Chesterton to send a telegram to his wife, Frances Blogg, whom he married in 1901, from some distant (and incorrect) location writing such things as, “Am at Market Harborough. Where ought I to be?” to which she would reply, “Home.”

Chesterton loved to debate, often publicly debating friends like George Bernard Shaw, H. G. Wells, Bertrand Russell, and Clarence Darrow. Chesterton was usually considered the winner. According to his autobiography, he and George Bernard Shaw played cowboys in a silent movie that, alas, was never released.

He is buried in Beaconsfield, Buckinghamshire, in the Roman Catholic Cemetery.

Some conservatives today have been influenced by his support for distributism. The right-wing journalist A. K. Chesterton was a cousin.

Biography By: This article is licensed under the GNU Free Documentation License and uses material adapted in whole or in part from the Wikipedia article on G. K. Chesterton.

The Rolling English Road (No Comments »)