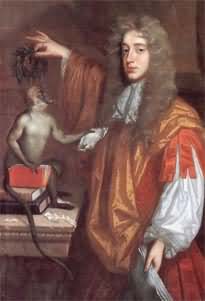 John Wilmot, 2nd Earl of Rochester (April 1, 1647 – July 26, 1680) was an English nobleman, a friend of King Charles II of England, and the writer of much satirical and bawdy poetry.

Rochester was born in Ditchley, Oxfordshire, and educated at Wadham College, Oxford. Having carried out the Grand Tour, he became the toast of the Restoration court and a patron of the arts. He married an heiress, Elizabeth Malet, but had many mistresses, including the actress Elizabeth Barry. Shortly before his death, he had a theistic change of heart, largely thanks to the influence of Bishop Gilbert Burnet.

Rochester’s most famous verse concerned King Charles II of England, his great friend. In reply to his jest that:

“He never said a foolish thing, nor ever did a wise one”,

Charles is reputed to have said:

“That is true — for my words are my own, but my actions are those of my ministers.”

Rochester’s mother was a Parliamentarian by descent and inclined to Puritanism for possibly expedient reasons. His father, a hard-drinking Royalist from Anglo-Irish stock, had been created Earl of Rochester in 1652 for military services to Charles II during his exile under the Commonwealth; he died abroad in 1658, two years before the restoration of monarchy in England.

At twelve Rochester matriculated at Wadham College, Oxford, and there, it is said, “grew debauched”. At fourteen he was conferred with the degree of M.A. by the Earl of Clarendon, who was Chancellor to the University and Rochester’s uncle. After a tour of France and Italy, Rochester returned to London, where he was to grace the Restoration Court. Courage in sea-battle against the Dutch made him a hero.

In 1667 he married Elizabeth Malet, a witty heiress whom he had attempted to abduct two years earlier. Pepys describes the event in his diary, 28 May 1665: “Thence to my Lady Sandwich’s, where, to my shame, I had not been a great while before. Here, upon my telling her a story of my Lord Rochester’s running away on Friday night last with Mrs Mallet, the great beauty and fortune of the North, who had supped at Whitehall with Mrs Stewart, and was going home to her lodgings with her grandfather, my Lord Haly, by coach; and was at Charing Cross seized on by both horse and footmen, and forcibly taken from him, and put into a coach with six horses, and two women provided to receive her, and carried away. Upon immediate pursuit, my Lord of Rochester (for whom the King had spoke to the lady often, but with no success) was taken at Uxbridge; but the lady is not yet heard of, and the King mighty angry and the Lord sent to the Tower.”

Rochester’s life is divided between domesticity in the country and a riotous existence at Court, where he was renowned for drunkenness, vivacious conversation, and “extravagant frolics” as part of the Merry Gang (as Andrew Marvell called them) who flourished for about fifteen years after 1665. As well as Wilmot they included Henry Jermyn, Charles Sackville Lord Buckhurst (later Earl of Dorset), John Sheffield Earl of Mulgrave, Henry Killigrew, Sir Charles Sedley, the playwrights William Wycherley and George Etherege, and George Villiers, Duke of Buckingham.

In banishment from Court for a scurrilous lampoon on Charles II, Rochester set up as “Doctor Bendo”, a physician skilled in treating barrenness; his practice was, it is said, “not without success”. He was deeply involved with the theatre and was himself the model for the witty and poetry-reciting rake Dorimant in Etherege’s The Man of Mode (1676). According to an often repeated anecdote, his coaching of his mistress Elizabeth Barry began her career as the greatest actress of the Restoration stage. Modern scholars, however, have little faith in this story, which was first told much later (see Elizabeth Barry).

At the age of thirty-three, as Rochester lay dying — from syphilis, it is assumed — his mother had him attended by her religious associates; a deathbed renunciation of atheism was published and promulgated as the conversion of a prodigal. This became legendary, reappearing in numerous pious tracts over the next two centuries.

Rochester’s own writings were at once admired and infamous. Posthumous printings of his play Sodom, or the Quintessence of Debauchery gave rise to prosecutions for obscenity, and were destroyed. On 16 December 2004 a copy of Sodom (characterized as the world’s first known piece of printed pornography) was sold by Sotheby’s for £45,600. During his lifetime, his songs and satires were known mainly from anonymous broadsheets and manuscript circulation; most of Rochester’s poetry was not published under his name until after his death.

Rochester has not lacked distinguished admirers. Defoe quoted him widely and often. Tennyson would recite from him with fervour. Voltaire admired Rochester’s satire for ‘energy and fire’ and translated some lines into French to ‘display the shining imagination his lordship only could boast’. Goethe could quote Rochester in English, and cited his lines to epitomise the intensely ‘mournful region’ he encountered in English poetry. Hazlitt judged that ‘his verses cut and sparkle like diamonds’, while ‘his contempt for everything that others respect almost amounts to sublimity’.

The film “The Libertine,” which was shown at the 2004 Toronto Film Festival, and which to date, has yet to be released in the U.S., chronicles Rochester’s life, with Johnny Depp as Rochester, Samantha Morton as Elizabeth Barry, John Malkovich as King Charles II, and Rosamund Pike as Elizabeth Malet.

Biography By: This article is licensed under the GNU Free Documentation License and uses material adapted in whole or in part from the Wikipedia article on John Wilmot.