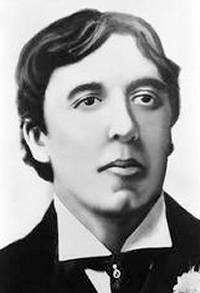 Oscar Wilde (1854-1900), Irish poet and dramatist whose reputation rests on his comic masterpieces Lady Windermere’s Fan(1892) and The Importance of Being Earnest (1895). Among Wilde’s other best-known works are his only novel The Picture of Dorian Gray(1891) and his fairy tales especially “The Happy Prince.”

Wilde was born on October 16, 1854 in Dublin to unconventional parents – his mother Lady Jane Francesca Wilde (1820-96), was a poet and journalist. His father was Sir William Wilde, an Irish antiquarian, gifted writer, and specialist in diseases of the eye and ear. Wilde studied at Portora Royal School, Enniskillen, County Fermanagh (1864-71), Trinity College, Dublin (1871-74) and Magdalen College, Oxford (1874-78).

In 1878 Wilde received his B.A. and in the same year he moved to London. His lifestyle and humorous wit soon made him the spokesman for Aestheticism, the late 19th century movement in England that advocated art for art’s sake. He worked as art reviewer (1881), lectured in the United States and Canada (1882), and lived in Paris (1883). Between the years 1883 and 1884 he lectured in Britain. From the mid-1880s he was a regular contributor for Pall Mall Gazette and Dramatic View. In 1884 Wilde married Constance Lloyd (died 1898), and to support his family Wilde edited in 1887-89 Woman’s World. In 1888 he published The Happy Prince and Other Tales, fairy-stories written for his two sons. Wilde’s marriage ended in 1893. He had met an few years earlier Lord Alfred Douglas, an athlete and a poet, who became both the love of the author’s life and his downfall.

Wilde made his reputation in the theatre world between the years 1892 and 1895 with a series of highly popular plays. Lady Windermere’s Fan (1892) dealt with a blackmailing divorcée driven to self-sacrifice by maternal love. In A Woman of No Importance (1893) an illegitimate son is torn between his father and mother. An Ideal Husband (1895) dealt with blackmail, political corruption and public and private honor. The Importance of Being Earnest (1895) was about two fashionable young gentlemen and their eventually successful courtship. Before his theatrical success Wilde produced several essays. His two major literary-theoretical works were the dialogues “The Decay of Lying” (1889) and “The Critic as Artist” (1890).

Although married and the father of two children, Wilde’s personal life was open to rumors. His years of triumph ended dramatically, when his intimate association with Alfred Douglas led to his trial on charges of homosexuality (then illegal in Britain). He was sentenced to two years hard labor for the crime of sodomy. Wilde was first in Wandsworth prison, London, and then in Reading Gaol. During this time he wrote De Profundis (1905), a dramatic monologue and autobiography, which was addressed to Alfred Douglas.

After his release in 1897 Wilde in Berneval, near Dieppe. He wrote “The Ballad of Reading Gaol”, revealing his concern for inhumane prison conditions. Wilde died of cerebral meningitis on November 30, 1900, penniless, in a cheap Paris hotel at the age of 46.

Charmides and Other Poems