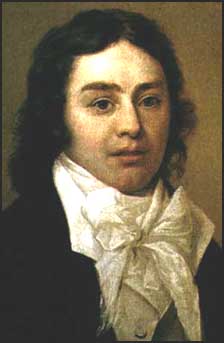 Samuel T. Coleridge was born in Ottery St. Mary, Devonshire, as the youngest son of the vicar of Ottery St Mary. “At six years old I remember to have read Belisarius, Robinson Crusoe, and Philip Quarll – and then I found the Arabian Nights’ entertainments – one tale of which (the tale of a man who was compelled to seek for a pure virgin) made so deep an impression on me (I had read it in the evening while my mother was mending stockings) that I was haunted by spectres whenever I was in the dark – and I distinctly remember the anxious and fearful eagerness with which I used to watch the window in which the books lay – and whenever the sun lay upon them, I would seize it, carry it by the wall, and bask, and read.”

After his father’s death Coleridge was sent away to Christ’s Hospital School in London. Coleridge studied at Jesus College. He joined in the reformist movement stimulated by the French Revolution, and abandoned his studies in 1793. After an unhappy love-affair and pressed by debt he in desperation enlisted in the 15th Light Dragoons under the name of Silas Tomkin Comberbache. Soon he realized that he was unfit for an army career and he was brought out under ‘insanity’ clause by his brother, Captain James Coleridge. In Cambridge Coleridge met the radical, future poet laureate Robert Southey (1774-1843) in 1794. Coleridge moved with him to Bristol to establish a community, but the plan failed. In 1795 he married the sister of Southey’s fiancée Sara Fricker, whom he did not really love.

Coleridge’s collection POEMS ON VARIOUS SUBJECTS was published in 1796, and in 1797 appeared POEMS. In the same year he began the publication of a short-lived liberal political periodical The Watchman. He started a close friendship with Dorothy and William Wordsworth, one of the most fruitful creative relationships in English literature. From it resulted Lyrical Ballads, which opened with Coleridge’s ‘Rime of the Ancient Mariner’ and ended with Wordsworth’s Tintern Abbey. These poems set a new style by using everyday language and fresh ways of looking at nature. ‘The Rime of the Ancient Mariner‘, a 625-line ballad, is among his essential works. It tells of a sailor who kills an albatross and for that crime against nature endures terrible punishments. The ship upon which the Mariner serves is trapped in a frozen sea. An albatross comes to the aid of the ship, it saves everyone, and stays with the ship until the Mariner shoots it with his crossbow. The motiveless malignity leads to punishment:

After a ghost ship passes the crew begin to die but the mariner is eventually rescued. He knows his penance will continue and he is only a machine for dictating always the one story. When Mrs. Barbauld objected to Coleridge that the poem lacked a moral, the poet told her that “in my own judgment the poem had too much; and that the only or chief fault, if I might say so, was the obtrusion of the moral sentiment so openly on the reader as a principle or cause of action in a work of pure imagination.”

The brothers Josiah and Thomas Wedgewood granted Coleridge an annuity of 150 pounds, thus enabling him to pursue his literary career. Disenchanted with political developments in France, Coleridge visited Germany in 1798-99 with Dorothy and William Wordsworth, and became interested in the works of Immanuel Kant. He studied philosophy at Göttingen University and mastered the German language. However, he considered his translations of Friedrich von Schiller’s plays from the trilogy Wallenstein distasteful.

At the end of 1799 Coleridge fell in love with Sara Hutchinson, the sister of Wordsworth’s future wife, to whom he devoted his work DEJECTION: AN ODE (1802). During these years Coleridge also began to compile his NOTEBOOKS, daily meditations of his life.

Suffering from neuralgic and rheumatic pains, Coleridge had became addicted to opium, freely prescribed by physicians. In 1804 he sailed to Malta in search of better health. Supplied with an ounce of opium and nine ounces of laudanum, he wrote in his journal:

He worked two years as secretary to the governor of Malta, and later traveled through Sicily and Italy, returning then to England. In 1809-10 he wrote and edited with Sara Hutchinson the literary and political magazine The Friend.

From 1808 to 1818 he he gave several lectures, chiefly in London, and was considered the greatest of Shakespearean critics. Kubla Khan was inspired by a dream In the summer of 1797 the author had retired to a lonely farm-house between Porlock and Linton. He had taken anodyne and after three hours sleep he woke up with a clear image of the poem. Disturbed by a visitor, he lost the vision, with the exception of some eight or ten scattered lines and images. Modern scholarship is skeptical of this story, but it reflects Coleridge’s problems to manage practical life and finish his ideas.

In 1810 Coleridge’s friendship with Wordsworth came to crisis, and the two poets never fully returned to the relationship they had earlier. During the following years Coleridge lived in London, on the verge of suicide. After a physical and spiritual crisis at Greyhound Inn, Bath, he submitted himself to a series of medical régimes to free himself from opium. He found a permanent harbor in Highgate in the household of Dr. James Gillman, and enjoyed almost legendary reputation among the younger Romantics. During this time he rarely left the house.

In 1816 the unfinished poems CHRISTABEL and KUBLA KHAN were published, and next year appeared SIBYLLINE LEAVES. According to the poet, he heard the words to ‘Kubla Khan‘ in a dream. After 1817 Coleridge devoted himself to theological and politico-sociological works – his final position was that of a Romantic conservative and Christian radical. He also contributed to several magazines, among them Blackwood’s Edinburgh Magazine. Coleridge was elected a fellow of the Royal Society of Literature in 1824. He died in Highgate, near London, on July 25, 1834.