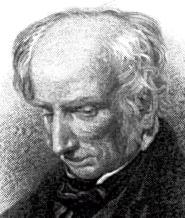 British poet who spent his life in the Lake District of Northern England. Wordsworth, along with Samuel Taylor Coleridge, can be said to have started the English Romantic movement with their collection LYRICAL BALLADS in 1798. When many poets still wrote about ancient heroes in grandiloquent style, Wordsworth focused on nature, children, the poor, common people, and used ordinary words to express his personal feelings. His definition of poetry as “the spontaneous overflow of powerful feelings arising from emotion recollected in tranquillity” was shared by a number of his followers.

“Poetry is the breath and finer spirit of all knowledge; it is the impassioned expression which is in the countenance of all Science.” (from Lyrical Ballads, 2nd ed., 1800)

William Wordsworth was born in Cockermouth, Cumberland, in the Lake District. His father was John Wordsworth, Sir James Lowther’s attorney. The magnificent landscape deeply affected Wordsworth’s imagination and gave him a love of nature. He lost his mother when he was eight and five years later he also lost his father. The domestic problems separated Wordsworth from his beloved and neurotic sister Dorothy, who was a very important person in his life. Dorothy had a special connection to nature. She provided Wordsworth with a valuable source of thoughts and impressions for which he was usually given full credit.

With the help of his two uncles, Wordsworth entered a local school and continued his studies at Cambridge University. As a writer Wordsworth made his debut in 1787, when he published a sonnet in The European Magazine. In that same year he entered St. John’s College, Cambridge, from where he took his B.A. in 1791. During a summer vacation in 1790 Wordsworth went on a walking tour through revolutionary France and also traveled in Switzerland.

On his second journey in France, Wordsworth had an affair with a French girl, Annette Vallon, a daughter of a barber-surgeon, by whom he had an illegitimate daughter – Anne Caroline. The affair formed the basis of the poem ‘Vaudracour and Julia’, but otherwise Wordsworth did his best to hide the affair from posterity. After his journeys Wordsworth spent several aimless and unhappy years. In 1795 he met Coleridge. Wordsworth’s financial situation became better in 1795 when he received a legacy and was able to settle at Racedown, Dorset, with his sister Dorothy.

Encouraged by Coleridge and stimulated by the close contact with nature, Wordsworth composed his first masterwork, Lyrical Ballads, which opened with Coleridge’s ‘Ancient Mariner.’ About 1798 he started to write large and philosophical autobiographical poem, completed in 1805, and published posthumously in 1850 under the title THE PRELUDE. The long work described the poet’s love of nature and his own place in the world order.

“Dust as we are, the immortal spirit grows
Like harmony in music; there is a dark
Inscrutable workmanship that reconciles
Discordant elements, makes them cling together
In one society.”

The winter 1798-99 Wordsworth spent with his sister and Coleridge in Germany, where he wrote several poems, including the enigmatic ‘Lucy’ poems. After return he moved Dove Cottage, Grasmere, and in 1802 married Mary Hutchinson. They cared for Wordsworth’s sister Dorothy for the last 20 years of life – she had lost her mind as a result of physical ailments. Almost all of Dorothy’s memory was destroyed, she sat by the fire, and occasionally recited her brother’s poems.

Wordsworth’s second verse collection, POEMS, IN TWO VOLUMES, appeared in 1807. In the same year Thomas de Quincey met first time Wordsworth and wrote about him and other Lake Poets in several essays. He described revealingly Wordsworth’s mean appearance and Dorothy’s lack of sex appeal. The frankness of his text, although published in the 1830s and 1840s, was considered indiscreet by later Victorian critics.

Wordsworth’s central works were produced between 1797 and 1808. His poems written during his middle to late years have not gained similar critical approval. Wordsworth’s Grasmere period ended in 1813 when he moved to Rydal Mount. He was appointed official distributor of stamps for Westmoreland. He moved to Rydal Mount, Ambleside, where he spent the rest of his life. From the age of 50 his creativity began to decline, but three female assistants took care of him, and filled his life with admiration. Wordsworth abandoned his radical faith and became a patriotic, conservative public man.

In 1843 he succeeded Robert Southgey (1774-1843) as England’s poet laureate. Wordsworth died on April 23, 1850. The second generation of Romantics, Byron and Shelley, considered him ‘dull.’ Later the philosopher Bertrand Russell summed up the poet’s career: “In his youth Wordsworth sympathized with the French Revolution, went to France, wrote good poetry, and had a natural daughter. At this period he was called a ‘bad’ man. Then he became ‘good,’ abandoned his daughter, adopted correct principles, and wrote bad poetry.”

“… Wordsworth was of a good height (five feet ten), and not a slender man; on the contrary, by the side of Southey, his limbs looked thick, almost in a disproportionate degree. But the total effect of Wordsworth’s person was always worst in a state of motion. Meantime, his face – that was one which would have made amends for greater defects of figure.” (from Reminiscences of the English Lake Poets by Thomas de Quincey, 1907)

Dorothy Wordsworth (1771-1855) published travel books and journals, such as GRASMERE JOURNALS 1800-03 and THE ALFOXDEN JOURNAL 1798, in which she described the friendship of Wordsworth and Coleridge. After a serious illness in 1829, she was obliged to lead the life of an invalid, which deeply affected her imaginative and mental powers.

Lyrical Ballads, With Other Poems