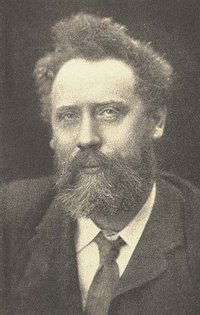 Henley was born at Gloucester and educated at the Crypt Grammar School. The school was a poor relation of the Cathedral School, and Henley indicated its shortcomings in his article (Pall Mall Magazine, Nov. 1900) on T. E. Brown the poet, who was headmaster there for a brief period. Brown’s appointment was a stroke of luck for Henley, for whom it represented a first acquaintance with a man of genius. “He was singularly kind to me at a moment when I needed kindness even more than I needed encouragement.” Brown did him the essential service of lending him books. Henley was no classical scholar, but his knowledge and love of literature were vital.

After suffering tuberculosis as a boy, he found himself, in 1874, aged twenty-five, an inmate of the hospital at Edinburgh. From there he sent to the Cornhill Magazine poems in irregular rhythms, describing with poignant force his experiences in hospital. Leslie Stephen, then editor, visited his contributor in hospital and took Robert Louis Stevenson, another recruit of the Cornhill, with him. The meeting between Stevenson and Henley, and the friendship of which it was the beginning, form one of the best-known episodes in English literature (see Stevenson’s letter to Mrs Sitwell, Jan. 1875, and Henley’s poems “An Apparition” and “Envoy to Charles Baxter”). Henley’s poem Invictus, an evocation of Victorian stoicism, was first published in 1875.

In 1877 Henley went to London and began his editorial career by editing London, a journal written for the sake of its contributors rather than the public. Among other distinctions it first gave to the world The New Arabian Nights of Stevenson. Henley himself contributed a series of verses chiefly in old French forms. He had been writing poetry since 1872, but (so he told the world in his “advertisement” to his collected Poems, 1898) he “found himself about 1877 so utterly unmarketable that he had to own himself beaten in art and to addict himself to journalism for the next ten years.” When London folded, he edited the Magazine of Art from 1882 to 1886. At the end of that period he came into the public eye as a poet. In 1887 Gleeson White made for the popular series of Canterbury Poets (edited by William Sharp) a selection of poems in old French forms. In his selection Gleeson White included many pieces from London, and only after completing the selection did he discover that the verses were all by Henley. In the following year, HB Donkin in his volume Voluntaries, done for an East End hospital, included Henley’s unrhymed rhythms quintessentializing the poet’s memories of the old Edinburgh Infirmary. Alfred Nutt read these, and asked for more; and in 1888 his firm published A Book of Verse.

Henley was by this time well known within a restricted literary circle, and the publication of this volume determined his fame as a poet, which rapidly outgrew these limits, two new editions of the volume being printed within three years. In this same year (1888) Fitzroy Bell started the Scots Observer in Edinburgh, with Henley as literary editor, and early in 1889 Bell left the conduct of the paper to him. It was a weekly review on the lines of the old Saturday Review, but inspired in every paragraph by the vigorous and combative personality of the editor. It was transferred to London as the National Observer, and remained under Henley’s editorship until 1893. Though, as Henley confessed, the paper had almost as many writers as readers, and its fame was mainly confined to the literary class, it was a lively and influential feature of the literary life of its time. Henley had the editor’s great gift of discerning promise, and the “Men of the Scots Observer,” as Henley affectionately and characteristically called his band of contributors, in most instances justified his insight. The paper found utterance for the growing imperialism of its day, and among other services to literature gave to the world Rudyard Kipling’s Barrack-Room Ballads.

In 1890 Henley published Views and Reviews, a volume of notable criticisms, which he described as “less a book than a mosaic of scraps and shreds recovered from the shot rubbish of some fourteen years of journalism.” The criticisms, covering a wide range of authors (all English or French except Heinrich Heine and Leo Tolstoy) were remarkable for insight and gusto. In 1892 he published a second volume of poetry, named after the first poem, The Song of the Sword, but on the issue of the second edition (1893) re-christened London Voluntaries after another section. Stevenson wrote that he had not received the same thrill of poetry since George Meredith’s “Joy of Earth” and “Love in the Valley,” and he did not know that that was so intimate and so deep. “I did not guess you were so great a magician. These are new tunes; this is an undertone of the true Apollo. These are not verse; they are poetry.” In 1892 Henley published also three plays written with Stevenson – Beau Austin, Deacon Brodie and Admiral Guinea. In 1895 followed Macaire, afterwards published in a volume with the other plays. Deacon Brodie was produced in Edinburgh in 1884 and later in London. Herbert Beerbohm Tree produced Beau Austin at the Haymarket on November 3, 1890.

Henley’s poem Pro Rege Nostro became popular during the First World War as a piece of patriotic verse. It contains the following refrain:

What have I done for you, England, my England?
What is there I would not do, England my own?

The poem and it sentiments have since been parodied by many people often unhappy with the jingoism they feel it expresses or the propagandistic use it is put to. England, My England a short story by D. H. Lawrence and England, Their England a novel by A. G. Macdonnell both use the phrase.