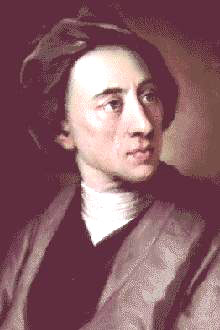 “Who is this Pope that I hear so much about?” said George II; “I cannot discover what is his merit. Why will not my subjects write in prose? I hear a great deal, too, of Shakespeare, but I cannot read him, he is such a bombast fellow.”

Alexander Pope, an only child, was born in London, on May 21, 1688, the year of the Glorious revolution. His father, a linen-draper, was forty-two, his mother forty-six. Both were Roman Catholics, and his father, Alexander Sr., retired from business after his son’s birth, perhaps because a new act of Parliament prohibited Catholics from living within ten miles of London. Between 1696 and 1700 Pope was tutored at home by a priest, and then enrolled in two Catholic schools, but he was largely self-educated. His religion would have made it impossible, at the time, to pursue a career in law or medicine or the Clergy even had he wished to: as a Catholic he was not, for example, permitted to attend a university. A precocious child, he could read Latin, Greek, French and Italian while still very young, and (according to his own account of the matter) was already, at sixteen, writing the rather sophisticated verse later published as his “Pastorals.” Characteristically, however, he would destroy a great deal of his juvenalia, the continued existence of which might have detracted from the image of the poet as child prodigy which he desired, later in life, to propagate.

In 1700 the Pope family moved to Whitehill House at Binfield in Windsor Forest, and there, circa 1705, Pope, until then a healthy child, contracted a tubercular bone disease, attributed at the time to his “perpetual application” to his studies. Attacks of this disease would recur at intervals throughout what he would refer to as “this long Disease, my Life.” It left him frail, prone to various other illnesses, humpbacked, and permanently stunted: fully grown, he would attain a height of only four and one half feet.

In his early twenties he made frequent visits to London, and became acquainted with the literati there, including Wycherley and Walsh. In 1709 the “Pastorals,” Pope’s first published work, appeared in Tonson’s Poetical Miscellanies. In 1711 he met the Blount sisters, Teresa and Martha: he became infatuated, briefly, with Teresa, but the amiable Martha remained a close friend for the rest of his life: he had many friendships with women, perhaps because though he admired them greatly he was too diminutive ever to be considered as a possible husband or prospective lover. His “Essay on Criticism” was published anonymously in 1711, and was furiously attacked in print by John Dennis, a famous literary critic of the day whom Pope had satirized in the poem. Dennis retaliated by referring to Pope as a “hump-backed toad,” but the “Essay” brought him to the attention of Swift, Addison, Gay, Parnell, Oxford, and Steele, all Tory members of the Martinus Scriblerus Club, and in 1712 Steele would published Pope’s “Messiah” in the Spectator No. 378. In the same year, at the suggestion of John Caryll, a friend and a member of the circle of prominent Catholics which centered on the Englefields and the Blounts, Pope wrote and published the first version of The Rape of the Lock, ostensibly to reconcile two feuding but prominent Catholic families.

1713 saw the publication of Pope’s “Windsor Forest,” a poem celebrating the Treaty of Utrecht, which had been negotiated by the Tories. “Windsor Forest” won him a closer friendship with Swift, and in 1714 he published a more complex version of The Rape of the Lock. In 1715 Pope met Lady Mary Wortley Montagu. His letters reveal that he was at least temporarily infatuated with her, though much later he would hold her up to malicious ridicule in his essay Peri Bathous, published much later, in 1728. By now a sucessful author, he embarked, between 1715 and 1720, on his verse translation of Homer’s Iliad (which, with his translation of the Odyssey, written in collaboration with William Broome and Elijah Fenton, would be the great literary labor of his life) and which, published at intervals over the years, in six volumes, was also a great popular and financial success.

His father died in 1717, the year the first volume of his collected Works was published. With the money his Iliad had earned him, Pope (the first author in English history to be able to sustain himself financially entirely on the profits derived from the publication of his own works) was able, in 1718, to lease the villa of Twickenham on the Thames near Richmond, where he moved with his widowed mother: over the years he entertained his friends there, and oversaw the construction of his famous grotto.

In 1725 he published his edition of Shakespeare’s Works, and the first three volumes of his translation of the Odyssey also appeared: 1726 saw the appearance of the final three volumes of the same work. In 1727 Swift and Pope published the first two volumes of their Miscellanies, and Pope himself was at work on his Dunciad, which had originated as a scheme of the Scriblerus Club: in this, its earliest incarnation, Lewis Theobald, a Shakespearean scholar who had feuded with Pope (who feuded, during the course of his life, with innumerable critical and literary rivals) had the dubious honor of being its central character.

The final volume of the Swift-Pope Miscellanies appeared in 1728, and included Peri Bathouse, which provides us with a notion of how nasty, on occasion, Pope could be: William Broome, a man of talent if not of genius, had, as we have noted, helped him to write his Odyssey, but Pope offended him not only in Peri Bathous but in these lines which appear in the first version of the Dunciad, which appeared, in three books, during that same year: “Hibernian Politicks, O Swift, thy doom,/ And Pope’s, translating three whole years with Broome.” Broome commented on Pope’s ungenerous malice in a letter: “I often resemble him to an hedgehog; he . . . lies snug and warm, and sets his bristles out against all mankind. Sure he is fond of being hated. I wonder he is not thrashed: but his littleness is his protection; no man shoots a wren.” As soon as The Dunciad appeared, the dunces, in their turn, attacked Pope, but he had much the better of the affair. 1729 brought the publication of the Dunciad Variorum. The first three epistles of An Essay on Man were published anonymously in 1733, the year Pope’s mother died. The Fourth epistle of the Essay on Man appeared, also anonymously, in 1734.

The colorfully scurrilous Edmund Curll, perhaps (and this is saying a good deal) the most unscrupulous publisher of his day, brought out an expurgated and incomplete edition of Pope’s letters in 1735; an edition which appeared to be unauthorized. In fact, however, the devious Pope initiated the work himself, carefully edited all of the letters, and himself put them in Curll’s hands. The same year saw the publication of the second volume of Pope’s collected Works.

In 1737 the artful Pope produced an “authorized” version of his Letters, and, when his authorship of the Essay on Man was acknowledged, he came under vehement attack for the religious views he had expressed there. The following year his satirical imitations of Horace were published, which attacked the corruption and venality of the Whig government under Sir Robert Walpole, and the indifference of the King, George II, both to the immorality which Walpole tolerated and to all things literary or cultural.

With the help of William Warburton, Pope produced the final version of the Dunciad, which appeared, in four books, in 1743: Colley Cibber, a bad poet who had nevertheless managed to become the poet laureate, replaced Theobald as its hero. Pope’s health, which had never been very good, was failing rapidly, and he died at Twickenham on May 30, 1744.