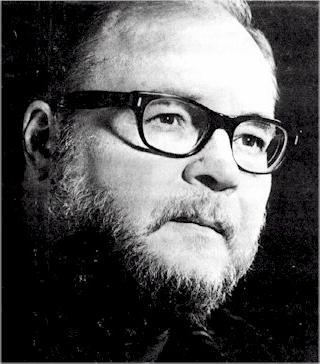 James Arlington Wright was born on December 13, 1927, in Martins Ferry, Ohio. His father, Dudley Wright, worked in the Hazel-Atlas Glass factory most of his life. His father would occasionally be layed-off when things were slow. Wright described his father as “… a handsome man of great physical strength and the greatest human strength of all, an enduring gentleness in the presence of the hardship that the Great Depression brought to everyone…” His mother is rarely mentioned and he was the middle of three sons. His life as a child in Ohio was bleak and seemingly hopeless with the poverty and suffering which surrounded him in the small valley of Martins Ferry. Wright’s whole life was aimed at leaving the small Ohio city and avoiding his father’s fate of factory work. While in highschool, James wrote an autobiography describing his “career as a visionary” starting in the second grade.

His passion for poetry was marked at a young age, as he had a great love for reading and even quoting William Dunbar’s, “Lament for the Markaris.” Wright missed a year of highschool when he was sixteen due to a nervous breakdown. There were more breakdowns, but Wright did manage to graduate.After being drafted to the army in 1946, Wright had petitioned his mother on numerous occasions to send the address of his former English instructor. He also requested that she send copies of poetry from Gerald Manley Hopkins and “Sonnets from the Portuguese,” by Elizabeth Barrett Browning. Wright had heard from a fellow army officer, who was also from Ohio, of Kenyon College back in his home state. He made plans to attend the college after leaving the army, by means of the G.I. bill. This would be his chance to escape the fate of his father and the tragic life of a factory worker. He sent home most of his military salary for savings in the hope of later attending the college. Prospects were looking up for Wright, as he was accepted to Kenyon College, “the most literary enclave in the state of Ohio, with its poet [John Crowe] Ransom, its tradition of writer-students, and The Kenyon Review, which was the journal of its literary moment” (Hall xxvi).

The college was just the source of escape that James needed. Having such teachers as Charles Coffin, Philip Timberlake, and Ransom, it provided great opportunity for literary achievement. Later, during Wright’s junior year, he hit a wall when his G.I. bill ran out, but with his brain and intelligence, James worked out ways of continuing till he finally graduated. While at Kenyon, “Wright was elected to Phi Beta Kappa, won the Robert Frost Poetry Prize, and published more than twenty poems in literary magazines” (“Language” 1). Wright’s achievements helped support his feeling of self worth. His classmates were mostly middle class, in contrast to his family being of the working class of Ohio. Upon graduation, Wright married his high-school sweetheart, Liberty Kardules, who was a nurse and teacher in Texas. Wright, with a Fulbright grant, took his wife to Vienna were he studied at the University of Vienna. They had their first child, Franz, while in Vienna.

After spending his time at the university working on and translating the poems of Georg Trakl and the stories of Theodor Storm, Wright and his new family returned to the U.S. He enrolled at the University of Washington where he studied under the instruction of such faculty members as Theodore Roethke and Wayne Burns. It was while at this university that his manuscript, “The Green Wall,” was selected for the Yale Series of Younger Poets award. Earning his master’s and doctorate degrees, Wright decided to teach literature at the University of Minnesota. His former professor (Roethke) , however, had been a large influence on James. When James finished his Ph.D., Roethke’s graduation present was a ticket to the world heavyweight championship bout of 1957 (Hall xxviii). Roethke’s influence on Wright was more than just literary. They both shared the same bipolar mood disorder, as well as the same mannerisms while in the company of large crowds; both Wright and Roethke were “provincial, literary, and shy; both relied on comic routines to get them through social situations . . . ” (Hall xxviii). Wright also had been corresponding with a fellow poet of his day, Donald Hall, in which he had written multiple paged, monologs of his drinking and depression.

Following a mild assault from another poet in a review of New Poets anthology, James wrote letters to friends stating that he was through writing poetry. In one letter to a fellow poet he spoke of denying the darker and wilder side of himself for the sake of subsisting on mere comfort–both academic and poetic (Hall xxix). He didn’t quit, however, but resorted back to an earlier iambic style in his next poem, “At the Executed Murderer’s Grave.” This was a difficult time in Wright’s life. He and his wife had a second child, a son named Marshall. Wright had been visiting his friend Donald Hall quite often and they had even looked for work together. At a MLA convention, Hall noticed Wright had a great ability to mimic others. He would entertain children with his impersonations and charms, yet resort back to an unworthy, lower-class, Ohio poet while in the presence of his colleagues.

Wright was very dependent upon his wife to get around, as James never learned how to drive. She would take him to Minnesota on weekends to visit with fellow poets. Though he enjoyed discussing with friends his progress as a poet and his love for teaching, he never felt truly secure in himself and free of his father’s fatefully tragic shadow, which seemed to haunt him his whole life. The day-to-day struggle James often referred to, had reached a climax when he was admitted to a mental hospital for electroshock treatment. Psychotherapy helped, but didn’t cure. His friends remember him talking of the blackened and satanic mills of the valley towns in Ohio. He even said, while in the presence of his close friend, Donald Hall, that they wanted him to go back to the mills. He spoke in almost a supernatural tone as he said that he would never go back, no matter how much they tried to push him (Hall xxxi). Nobody knew what or whom the they were that he referred to, but Wright must have fought these shadows all of his life, as drinking was a common stable in his life. His drinking both affected his professional and personal life. He even talked about attempting suicide after he left his wife, Liberty. However, his close friend Donald Hall, later said of Wright, “However beaten he was–some poems record defeat–James Wright was resilient” (xxxii).

Upon being fired from his teaching position at the University of Minnesota, James had a slight turn around in his life In 1966, he took a good job at Hunter College in New York, where he met Edith Ann Runk – Annie. They were married shortly after his move to New York, at the Riverside Church in April of 1967. James and Annie were good for each other, as she supported his poetry and tamed down his drinking. They spent a number of summers in Italy and Paris were they simply traveled from hotel to hotel, writing poetry, and being lazy. The year before James died was probably one of his best. From January through September of 1979, James and Annie traveled throughout Europe. James would write back to friends in the U.S. of his early mornings spent writing his new book of poems; letters written with vigor and new found life. However, in late autumn of that year, while back in the states, Wright was hospitalized with a severe sore throat. A diagnoses of cancer was the unwelcome news for James and Annie. The tumor was not responding to treatment and an operation was not an option. Annie soon arranged visits with old friends of his poetic generation. Just before dying, James had his close friend, Donald Hall, read from James’ final book of poems, This Journey. The few remaining pages were hardly legible, but non-the-less Hall simply uttered, “Wonderful, Jim, wonderful” (xxxvi).

James Wright died on March 25, 1980. His funeral was held at the Riverside Church – the same church that him and Annie had been married in. The church was full of morning poets, all grieving the loss of a dear friend. James Wright’s last book, This Journey, was published later that year.

The Branch Will Not Break