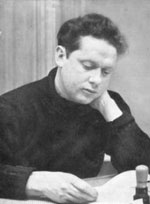 Welsh poet, short-story writer, and playwright, renowned for the unique brilliance of his verbal imagery and for his celebration of natural beauty.

Thomas was born in Swansea, Wales, on October 27, 1914. After grammar school he moved to London where, in 1934, his first book of poetry, Eighteen Poems, was published. At this early age, he revealed unusual power in the use of poetic diction and imagery; the volume won him immediate critical acclaim. Thematically, these poems and virtually all that followed seem obscure because they contain elements of surrealism and personal fantasy. But the freshness and vitality of Thomas’s language draw the reader into the poems and reveal the universality of the experiences with which they are concerned. This introspective tendency is less apparent in Deaths and Entrances (1946) and In Country Sleep (1951), which are generally regarded as containing his finest writing. Thomas’s other works include Twenty-five Poems (1936) and The Map of Love (1939), containing both poetry and prose. A Portrait of the Artist as a Young Dog (1940) is a group of autobiographical sketches, and Adventures in the Skin Trade (published posthumously, 1954) contains an unfinished novel and other prose pieces. During World War II (1939-1945) Thomas wrote scripts for documentary motion pictures.

After the war Thomas was a literary commentator for BBC radio. Under Milk Wood (published posthumously, 1954), a play for voices, was originally written for radiobroadcast; when Thomas read it for its first public performance in Cambridge, Massachusetts, in 1953, it was still unfinished. The work became his most famous piece; it evokes the lives of the inhabitants of Llareggub, a small, Welsh seaside town. Noted for his readings of his own verse, Thomas became legendary in the United States, where he gave many lecture tours and gained a wide following. Nevertheless, his last years were shadowed by an increasingly tragic view of his own tempestuous life. His death in New York City on November 9, 1953, was brought on by alcoholism.

And Death Shall Have No Dominion (No Comments »)

Do Not Go Gentle Into That Good Night (No Comments »)