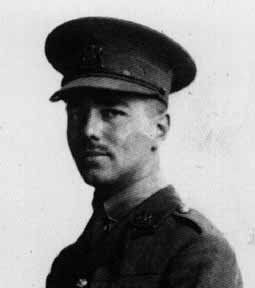 Wilfred Owen was born in 1893 to a middle-class family in Oswestry in the North of England. Two years later, Owen’s grandfather, the financial mainstay of the family, died almost bankrupt. Owen’s parents had to move into rented accommodation in the more urban area of Birkenhead. His mother, in particular, resented the family’s loss of financial security and its outward signs of gentility.

Owen began to read and write poetry as a child, and, following his mother’s interest in religion, started to read the Bible on a daily basis. Owen’s family could not afford to send him to public school. Nor, when he failed to win an academic scholarship to the University of London (not as socially or intellectually exclusive as Oxford or Cambridge) in 1911, could they afford to pay for a college education.

Owen thus had to find an occupation suitable to a young man of his class. In 1911, he moved south to the village of Dunsden, near Reading, where he worked as a lay reader (an assistant to a clergyman) until 1913. He attended classes part-time at the University of Reading but, despite encouragement from the head of the English department, he again failed to win the scholarship that would have financed full-time study.

After falling ill in 1913, he decided to work as a private teacher, a profession which required little formal training and which would not compromise his, or his family’s, social status. He traveled to France, where he worked until 1915. Just after the outbreak of the war, he wrote to his mother, “While is is true that the guns will effect a little useful weeding, I am furious with chagrin to think
that the Minds which were to have excelled the civilization of ten thousand years are being annihilated – and bodies, the product of aeons of Natural Selection, melted down to pay for political statues.”

His comment ‘weeding’ echoes a common reaction to the outbreak of war, a belief that war would cleanse and reinvigorate a society which had, by the early years of the twentieth century, grown decadent, narcissistic and wasteful. Owen also re-iterates the standard Victorian belief in progress, bolstered by Charles Darwin’s now-popularized theories of evolution, in his view of the current
generation as the culmination of centuries of human and social evolution. Note his attention to bodies here, which recurs, almost obsessively, in the poetry he wrote towards the end of the war.

In 1915, Owen returned home and enlisted, in October, in the Artist’s Rifles. In March, 1916, he began an officers’ training course and in June, 1916, the 2nd Manchester Regiment commissioned him. Just after Christmas 1916, on 29 December, he shipped out to France. Beginning in January, 1917, he spent almost four months with his regiment moving in and out of the front line. After only a few
days in the front line, Owen wrote to his mother,

I can see no excuse for deceiving you about these 4 days. I have suffered seventh hell.

I have not been at the front.

I have been in front of it.

On 2 May, Owen returned home, diagnosed as suffering from shell-shock and thus ‘unfit to lead troops.’ In June, he arrived at Craiglockhart Hospital, just outside Edinburgh, in Scotland, where a small team of doctors treated those suffering from the psychological trauma of modern warfare. Siegfried Sassoon arrived in July and, within a month, Owen had introduced himself to his already published and well-known fellow patient. Soon Owen was showing his work
regularly to Sassoon (Remember the handwritten suggestions on the draft of Anthem for Doomed Youth). Owen published his work in the hospital journal, The Hydra and he met, through Sassoon, several other writers and poets, including Robert Graves.

Jon Stallworthy suggests that the most important poetic influences on Wilfred Owen before the war were the Bible and the English romantic poets, especially John Keats. (The War Poems, p. xxi)

In 1915, Owen wrote that the only thing that would hold him together on the battlefield would be the “sense that I was perpetuating the language in which Keats and the rest of them wrote.” (The War Poems, p. xxv)

Several writers in class mentioned how the language in the final version of Anthem became less romantic but noted that the rhyme and rhythm became stronger. Look at one or two of Keats’ poems (Chapman’s Homer and Ode to a Nightingale). Look at the sensuousness of the language, the patterning of sounds and the effects of rhythm in the poems. Look, also, at the vividness of the visual pictures Keats creates. Work out for yourself how much of the romantic heritage Owen is retaining, and how much he is abandoning, in his effort to write about modern war.

Sassoon was the strongest of Owen’s wartime influences. He encouraged Owen to explore the symptoms of shell-shock – flashbacks, recurrent and repetitive nightmares, and his inability to escape an obsessive concern with memories of battle – within his poetry. Owen also learned from Sassoon the power of interrupting a poem with direct speech, or colloquial expressions. Think of the exclamatory “O Jesus, make it stop” that cuts short Sassoon’s almost-sonnet, Attack. Memories surfaced in Owen’s letters. Writing to his mother at the end of 1917, he recalled the base camp in France whence soldiers moved up to the front line. It was “a vast, dreadful encampment… a kind of paddock where the beasts are kept a few days before the shambles.” Think of the ‘cattle’ image in Anthem. He also remembered hearing, “… the revelling of the Scotch troops, who are now dead and knew they would be dead”, an indication of the specificity of his concern for individual soldiers. (Quoted in The War Poems, p.xxvii)

Owen returned to his regiment in November, 1917 but did not return to France until the middle of the year. However, he wrote extensively during this period, revising and rewriting poems already begun, and beginning many new works. He published several poems in critically acclaimed literary journals during the first half of 1918. In September, he returned to the front line, where he won the Military Cross for bravery. He was preparing his first collection when, on 4 November, he was killed. The telegram informing his parents of his death arrived on 11 November, the day the signing of the Armistice ended the war. His first collection, introduced by Siegfried Sassoon, appeared two years after his death.