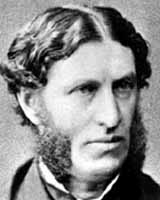 Matthew Arnold, poet and critic, was born at Laleham on the Thames, the eldest son of Thomas Arnold, historian and great headmaster of Rugby, and of Mary (Penrose) Arnold.

He was educated at Winchester; Rugby, where he won a prize for a poem on “Alaric at Rome”; and Oxford, to which he went as a Scholar of Balliol College in 1841, and where he won the Newdigate Prize for “Cromwell, A Prize Poem,” and received a Second Class in litterae humaniores, to the regret though hardly to the surprise of his friends. Always outwardly a worldling, he had not yet revealed the “hidden ground of thought and of austerity within” which was to appear in his poetry. “During these years,” writes Thomas Arnold the younger in Passages in a Wandering Life, “my brother was cultivating his poetic gift carefully, but his exuberant, versatile nature claimed other satisfactions. His keen bantering talk made him something of a social lion among Oxford men, he even began to dress fashionably.”

In 1845, however, after a short interlude of teaching at Rugby, he was elected Fellow of Oriel, accounted a great distinction at Oxford since the days of Keble, Newman, and Dr. Arnold himself.

The record of his private life at this period is curiously lacking. It is known that his allegiance to France was sealed by a youthful enthusiasm for the acting of Rachel, whom he later said he followed to Paris about this time and watched night after night, and that he visited George Sand at Nohant on one occasion and made on her the impression of a “Milton jeune et voyageant.” It seems not improbable, from the poems to the mysterious Marguerite and a veiled reference in an early letter to his intimate friend Arthur Hugh Clough, that his French allegiance was further strengthened by a less intellectual bond.

In 1847 he became private secretary to Lord Lansdowne, who in 1851 secured him an inspectorship of schools, which almost to the end of his life was to absorb the greater part of his time and energies, and may have been partly responsible for the smallness of his poetical output. But it shortly enabled him to marry Frances Lucy Wightman, daughter of Sir William Wightman, a Judge of the Queen’s Bench.

His literary career — leaving out the two prize poems — had begun in 1849 with the publication of The Strayed Reveller and Other Poems by A., which attracted little notice — although it contained perhaps Arnold’s most purely poetical poem “The Forsaken Merman” — and was soon withdrawn. Empedocles on Etna and Other Poems (among them “Tristram and Iseult”), published in 1852, had a similar fate.

Arnold’s work as a critic begins with the Preface to the Poems which he issued in 1853 under his own name, including extracts from the earlier volumes along with “Sohrab and Rustum” and “The Scholar-Gipsy” but significantly omitting “Empedocles.” In its emphasis on the importance of subject in poetry, on “clearness of arrangement, rigor of development, simplicity of style” learned from the Greeks, and in the strong imprint of Goethe and Wordsworth, may be observed nearly all the essential elements in his critical theory. He was still primarily a poet, however, and in 1855 appeared Poems, Second Series, among them “Balder Dead.”

Criticism began to take first place with his appointment in 1857 to the professorship of poetry at Oxford, which he held for two successive terms of five years. In 1858 he brought out his tragedy of Merope, calculated, he wrote to a friend, “rather to inaugurate my Professorship with dignity than to move deeply the present race of humans,” and chiefly remarkable for some experiments in unusual — and unsuccessful — metres.

In 1861 his lectures On Translating Homer were published, to be followed in 1862 by Last Words on Translating Homer, both volumes admirable in style and full of striking judgments and suggestive remarks, but built on rather arbitrary assumptions and reaching no well-established conclusions. Especially characteristic, both of his defects and his qualities, are on the one hand, Arnold’s unconvincing advocacy of English hexameters and his creation of a kind of literary absolute in the “grand style,” and, on the other, his keen feeling of the need for a disinterested and intelligent criticism in England.

This feeling, a direct result of his admiration for France, finds fuller expression in “The Function of Criticism at the Present Time’ and “The Literary Influence of Academies,” which were published as the first two of the Essays in Criticism (1865) in which collection the influence of French ideas, especially of the critic Sainte-Beuve, is conspicuous, both in matter and in form — that of the causerie. The Essays are bound together by a scheme of social rather than of purely literary criticism, as is apparent from the Preface, written in a vein of delicious irony and culminating unexpectedly in the well-known poetically phrased tribute to Oxford.

After the publication in 1867 of New Poems, which included “Thyrsis” and “Rugby Chapel,” elegies on Clough and on Dr. Arnold, and in 1868 of the Essay on the Study of Celtic Literature, a stimulating but illusory excursion into dangerously unfamiliar realms of philology and anthropology in imitation of Renan and perhaps of Gobineau, Arnold turned almost entirely from literature to social and theological writings. Inspired by a fervent zeal for bringing culture and criticism to the British middle class, beginning with the challenging Culture and Anarchy, Arnold launched by dint of sheer repetition most of the catchwords associated with his name such as “Sweetness and Light,” borrowed from Swift, and the term “Philistine,” borrowed from the Germans through Carlyle. He felt himself to be like the poet earlier described in his “Stanzas from the Grande Chartreuse”:

Wandering between two worlds, one dead,
The other powerless to be born

and in an attempt to reconcile traditional religion with the results of the new higher criticism, he fell back on the idea of God as a “Stream of Tendency,” a phrase derived from Wordsworth.

To the relief of a good many of his contemporaries, a volume appeared in 1878 called Last Essays on Church and Religion; and the next year was published Mixed Essays — “an unhappy title,” says Mr. Herbert Paul, “suggesting biscuits.” Worthy of particular mention are the two essays on the French critic Edmond Scherer and his writings on Milton and Goethe, and that on George Sand, who had influenced him strongly in his youth.

In 1883 Gladstone conferred on Arnold a pension of £250 a year, enabling him to retire from the post in the exercise of which he had not only traveled the length and breadth of England, but made several trips abroad to report on continental education. These reports were published in book form, and together with his ordinary reports as a school inspector had an important effect on English education. With his increased freedom, he set out on a lecture tour in the United States, spreading Sweetness and Light as far west as St. Louis. There, however, he began “to recognize the truth of what an American told the Bishop of Rochester, that ‘Denver was not ripe for Mr. Arnold.'” The three lectures on “Numbers,” “Literature and Science,” and “Emerson,” which he delivered to American audiences in 1883-84, were afterwards published as Discourses in America — the book, he told George Russell, later his biographer and editor of his Letters, by which, of all his prose writings, he should most wish to be remembered.

At this time an American newspaper compared him, as he stooped now and then to look at his manuscript on a music stool, to an elderly bird picking at grapes on a trellis; and another described him thus: “He has harsh features, supercilious manners, parts his hair down the middle, wears a single eyeglass and ill-fitting clothes.” He crossed the Atlantic again in 1886 on a visit to his daughter who had married an American. When she returned the visit in 1888, he went to Liverpool to meet her, and there, while running to catch a tramcar, suddenly died.

Essays in Criticism: Second Series which he had already collected, appeared shortly after his death. This volume, introduced by the essay on “The Study of Poetry,” with the celebrated discussion of poetry as “a criticism of life,” contains together with Essays in Criticism: First Series the prose work by which Arnold is best known. His best-known poems are probably “The Scholar-Gipsy”; “Thyrsis,” considered one of the finest elegies in English; and “Sohrab and Rustum,” a narrative poem, in tone a blend of the Homeric with the elegiac, based on an episode from the Shah-Nameh of the Persian poet Firdausi.

Matthew Arnold “was indeed the most delightful of companions,” writes G. W. E. Russell in Portraits of the Seventies; “a man of the world entirely free from worldliness and a man of letters without the faintest trace of pedantry.” A familiar figure at the Athenaeum Club, a frequent diner-out and guest at great country houses, fond of fishing and shooting, a lively conversationalist, affecting a combination of foppishness and Olympian grandeur, he read constantly, widely, and deeply, and in the intervals of supporting himself and his family by the quiet drudgery of school inspecting, filled notebook after notebook with meditations of an almost monastic tone. In his writings, he often baffled and sometimes annoyed his contemporaries by the apparent contradiction between his urbane, even frivolous manner in controversy, and the “high seriousness” of his critical views and the melancholy, almost plaintive note of much of his poetry. “A voice poking fun in the wilderness” was T. H. Warren’s description of him.

A deeper inconsistency was caused by the “want of logic and thoroughness of thought” which J. M. Robertson noted in Modern Humanists. Few of his ideas were his own, and he failed to reconcile the conflicting influences which moved him so strongly. “There are four people, in especial,” he once wrote to Cardinal Newman, “from whom I am conscious of having learnt — a very different thing from merely receiving a strong impression — learnt habits, methods, ruling ideas, which are constantly with me; and the four are — Goethe, Wordsworth, Sainte-Beuve, and yourself.” Dr. Arnold must be added; the son’s fundamental likeness to the father was early pointed out by Swinburne, and has been recently attested by Matthew Arnold’s grandson, Mr. Arnold Whitridge. Brought up in the tenets of the Philistinism which, as a professed cosmopolitan and the Apostle of Culture he attacked, he remained something of a Philistine to the end.

In his poetry he derived not only the subject matter of his narrative poems from various traditional or literary sources but even much of the romantic melancholy of his earlier poems from Senancour’s Obermann. His greatest defects as a poet stem from his lack of ear and his frequent failure to distinguish between poetry and prose. His significant if curious estimate of his own poems in 1869 was that they represented “on the whole, the main movement of mind of the last quarter of a century.”

It is perhaps true, however, that as Sir Edmund Chambers says, “in a comparison between the best works of Matthew Arnold and that of his six greatest contemporaries . . . the proportion of work which endures is greater in the case of Matthew Arnold than in any one of them.” His poetry endures because of its directness, and the literal fidelity of his beautifully circumstantial description of nature, of scenes, and places, imbued with a kind of majestic sadness which takes the place of music. Alike in his poetry and in his prose, which supplies in charm of manner, breadth of subject-matter, and acuteness of individual judgment, what it lacks in system, a stimulating personality makes itself felt. He was chiefly valuable to his own age as its severest critic; to ours he represents its humanest aspirations.