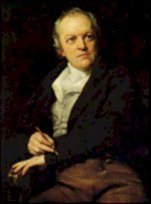 British poet, painter, visionary mystic, and engraver, who illustrated and printed his own books. Blake proclaimed the supremacy of the imagination over the rationalism and materialism of the 18th century. He joined for a time the Swedenborgian Church of the New Jerusalem in London and considered Newtonian science to be superstitious nonsense. Misunderstanding shadowed his career as a writer and artist and it was left to later generations to recognize his importance.

Blake was born in London, where he spent most of his life. His father was a successful London hosier and attracted by the doctrines of Emmanuel Swedenborg. Blake was first educated at home, chiefly by his mother. His parents encouraged him to collect prints of the Italian masters, and in 1767 sent him to Henry Pars’ drawing school. From his early years, he experienced visions of angels and ghostly monks, he saw and conversed with the angel Gabriel, the Virgin Mary, and various historical figures.

At the age of 14 Blake was apprenticed for seven years to the engraver James Basire. Gothic art and architecture influenced him deeply. After studies at the Royal Academy School, Blake started to produce watercolors and engrave illustrations for magazines. In 1783 he married Catherine Boucher, the daughter of a market gardener. Blake taught her to draw and paint and she assisted him devoutly. In 1774 Blake opened with his wife and younger brother Robert a print shop at 27 Broad Street, but the venture failed after the death of Robert in 1787. Blake’s important cultural and social contacts included Henry Fuseli, Reverend A.S. Mathew and his wife, John Flaxman (1755-1826), a sculptor and draughtsman, Tom Paine, William Godwin, and Mrs Elizabeth Montagu (1720-1800), married to the wealthy grandson of the earl of Sandwich.

His early poems Blake wrote at the age of 12. His first book of poems, POETICAL SKETCHES, appeared in 1783 and was followed by SONGS OF INNOCENCE (1789), and SONGS OF EXPERIENCE (1794). His most famous poem, ‘The Tyger’, was part of his Songs of Experience. Typical for Blake’s poems were long, flowing lines and violent energy, combined with aphoristic clarity and moments of lyric tenderness. He approved of free love, and sympathized with the actions of the French revolutionaries until the events of 1794 sickened him. In 1790 Blake engraved THE MARRIAGE OF HEAVEN AND HELL, a book of paradoxical aphorisms and his principal prose work. It expressed Blake’s revolt against the established values of his time. “Prisons are built with stones of Law, brothels with bricks of Religion.” Radically he sided with the Satan in Milton’s Paradise Lost and attacked the conventional religious views in a series of aphorisms. But the poet’s life in the realms of images did not plese his wife who once remarked: “I have very little of Mr. Blake’s company. He is always in Paradise.” Some of Blake’s contemporaries called him a harmless lunatic.

The Blakes moved south of the Thames to Lambeth in 1790. During this time Blake began to work on his ‘prophetic books’, where he expressed his lifelong concern with the struggle of the soul to free its natural energies from reason and organized religion. He wrote THE VISIONS OF THE DAUGHTERS OF ALBION (1793), AMERICA: A PROPHESY (1793), THE BOOK OF URIZEN (1794), and THE SONG OF LOS (1795). Blake hated the effects of the Industrial Revolution in England and looked forward to the establishment of a New Jerusalem “in England’s green and pleasant land.” Between 1804 and 1818 he produced an edition of his own poem JERUSALEM with 100 engravings.

In 1800 Blake was taken up by the wealthy William Hayley, poet and patron of poets. The Blakes lived in Hayley’s house at Felpham in Sussex, staying there for three years. At Felpham Blake worked on MILTON: A POEM IN TWO BOOKS, TO JUSTIFY THE WAYS OF GOD TO MEN. It was finished and engraved between 1803 and 1808. In 1803 Blake was charged at Chichester with high treason for having ‘uttered seditious and treasonable expressions, such as “D-n the King, d-n all his sibjects…”‘ but was acquitted. In 1809 Blake had a commercially unsuccessful exhibition at the shop once owned by his brother. However, economic problems did not depress him, but he continued to produce energetically poems, aphorisms, and engravings. “The tigers of wrath are wiser than the horses of instruction,” he wrote.

From 1818 Blake started to enjoy the admiration of a group of young disciples. Blake’s last years were passed in obscurity, quarreling even with some of the circle of friends who supported him. Among Blake’s later artistic works are drawings and engravings for Dante’s Divine Comedy and the 21 illustrations to the book of Job, which was completed when he was almost 70 years old. Blake never shook off the poverty, in large part due to his inability to compete in the highly competitive field of engraving and his expensive invention that enabled him to design illustrations and print words at the same time.

Independent through his life, Blake left no debts at his death on August 12, 1827. He was buried in an unmarked grave at the public cemetery of Bunhill Fields. Wordsworth‘s verdict after Blake’s death reflected many opinions of the time: “There was no doubt that this poor man was mad, but there is something in the madness of this man which interests me more than the sanity of Lord Byron and Walter Scott.” Blake’s influence grew through Pre-Raphealites and W.B. Yeats especially in Britain. His interest in legend was revived with the Romantics’ rediscovery of the past, especially the Gothic and medieval. In the 1960s Blake’s work was acclaimed by the Underground movement.